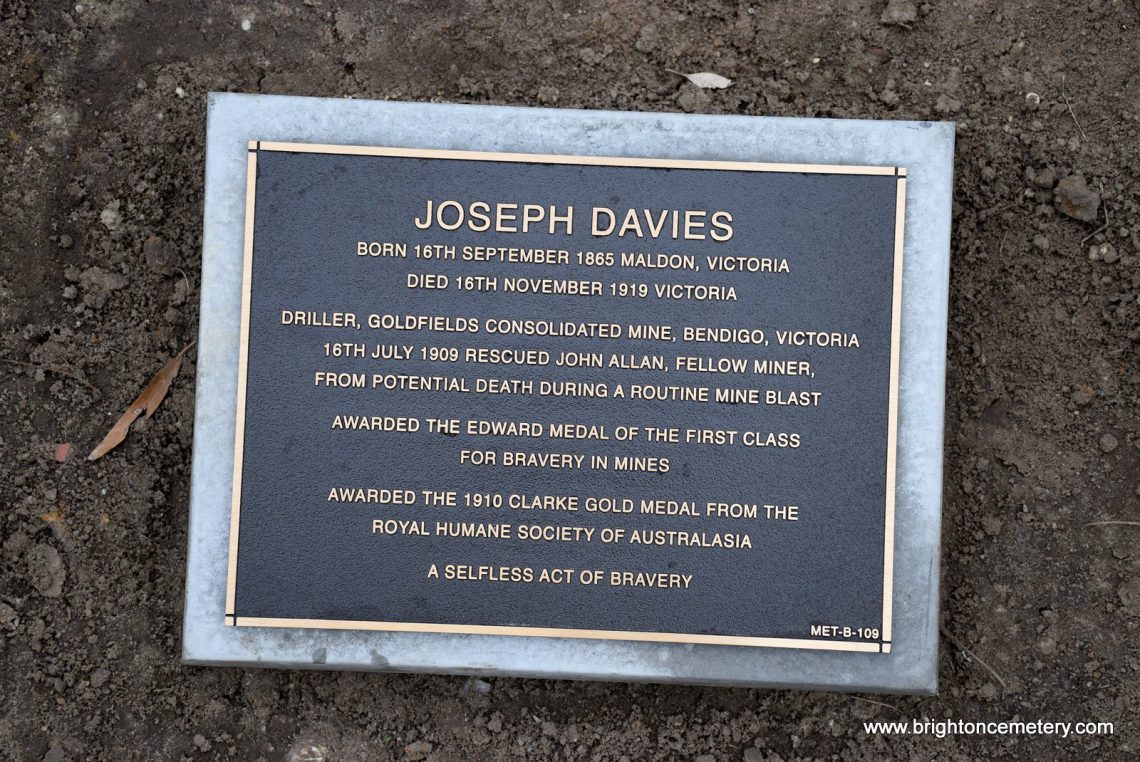 On 16 July 1909, Joseph Davies aged 44 went off to work as usual to the Goldfields Consolidated Mine, Diamond Hill, Bendigo where he worked as a driller. There he greeted his workmates 21-year old Jack Allan and a man named Daniel D’Arcy. Together they descended the 783 feet to the bottom of the mine to a shaft 13 feet 4 inches in length preparing explosives designed to blast away the rock to deepen the shaft. They worked quietly and well in the established routine, drilling two holes and packing them with nitro-glycerine explosive before adding the fuses. When their task was completed, the men ascended the ladder to the safety above, Davies first being the eldest of the trio, followed by D’Arcy. Allan was last to go up as his task was to light the fuses before he left. It was shortly before 3:00 pm. Davies and D’Arcy reached the safety of the plat 52 feet above the charges, but suddenly Allan slipped from the ladder as his head cleared the plat. He fell the 52 feet, landing right on top of the charges, breaking his right ankle and losing consciousness. James Halliday, the shift boss, saw Allan fall and exclaimed “Jack has gone down the shaft!” Davies cried “I’m after him!” and without a moments hesitation descended the ladder at speed to where Allan lay to rescue his fallen mate. Having drilled the holes, Davies knew the direction in which the rock would fall, but it was still a calculated gamble. Not knowing whether Allan was dead or alive he grabbed him by the feet dragging his body away to the safest place and lay over his injured comrade, shielding him from the impending explosions. Davies cringed as the first charge went off, raining pieces of rock and dirt over the two helpless men. He did not move, waiting for the second deafening roar that would again batter them with shattered rock. Closer this time, the rocks and dust cascaded over them as the second charge ignited with a thunderous crack. Other workers on the 52 feet plat who had seen Davies re-descend were sure both had perished. One called into the darkness, “Anyone still alive down there?” It was pitch black at the bottom of the shaft, the light of the candle that Davies was carrying having been extinguished by his swift descent. In a faint voice, Davies called back “Yes, but bring a light”. A cheer went up and the bucket was despatched to bring them both back to the surface, Allan being taken first. Davies elected to climb the ladders as he was not injured in any way. Jack Allan was taken to the Bendigo Hospital where he recovered from his broken right ankle and was later able to rejoin his wife and four young children. Edna Davies Bell Allan was born in 1910 at Bendigo, the year after the rescue. Six more children were born to the Allans, four of whom survived. In a poignant letter of thanks, Jack Allan’s wife wrote:

I wish to thank you
on behalf of my children and self
for the noble part you took in saving
my husband from certain death.
If it wasn’t for your brave deed
we would not have had him
with us today, and words cannot
express the kind thoughts we all
have towards you, and hope you
will enjoy the best of health for
a great number of years. Once more
thank you on our behalf.

I remain,
Yours truly,
Florrie Allan.

For his selfless act of bravery, Joe Davies was awarded the Royal Humane Society’s Clarke Gold Medal for 1909. Other awards bestowed include the Department of Mines Certificate in recognition of bravery and presence of mind; the King Edward Medal for Bravery in Mines; a gold watch and chain from his workmates at the Goldfields Consolidated Mine; a gold medal in the shape of Tasmania, with a ruby marking the mine in Tasmania from where it was sent; a leather-bound testimonial; and a sum of cash from subscriptions and donations from citizens and businesses in the Bendigo area. The Bendigo Historical Society holds some of the above awards and a collection of memorabilia as well as many congratulatory letters from people in all walks of life. The rescue was covered for several weeks in the newspapers of the day and Davies was recognised and congratulated wherever he went. He was not used to such attention, and seems to have always modestly protested that he had only done what any man should do for his mate. Nevertheless, his uncalculated act of bravery should never be forgotten.