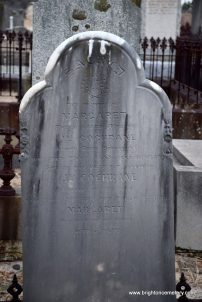 James Cochrane was born in Glasgow, Scotland on 20 April 1801, the son of William and Agnes née Sphenson and is the eponym of the local street of the same name formerly known as the “Little Brighton Road”. At the age of 11, James was apprenticed to the lock and hinge trade and at eighteen went to work as a journeyman for Andrew Holdsworth and Company, Foundry and Machinery works in Glasgow. He remained with them until 1829 when he set up his own business in Paisley. Ten years later in 1839, he decided to migrate to the Port Philip District of New South Wales, Australia.

Shortly before leaving Scotland James published a short book of poems, indicating he could read and write. The book was dedicated to Mr John Hamilton of North Park on the occasion of that gentleman’s son being advanced to the Chief Magistracy of Glasgow. Hamilton and Cochrane appear to have been cousins, although Hamilton was much senior. A copy of the book was brought to Australia, but was misplaced at the death of James’ daughter Jane. It is thought this book brought the Cochranes into contact with poet Adam Lindsay Gordon (q.v.).

James was 22 when he wed Margaret, daughter of Thomas and Agnes Gilchrist in Glasgow in 1823. The bride who, like her husband, could read and write (unusual for the times), was born in Gartmoor, Perthshire, Scotland in 1806.

Having decided to leave Scotland, James Cochrane, 39, his wife Margaret, 35, and their two surviving children, James jnr, 10, and an infant daughter, Jane (12 months), departed on 17 June 1841. They had four other children in Scotland, but none survived early childhood which may have been the determining factor in the decision to migrate to a warmer climate. The family travelled out on the maiden voyage on the three-masted sailing ship Thomas Arbuthnot, 621 Tons, reaching Melbourne on 2 October 1841 after a trip of 107 days. Shipping records show a bounty was paid to the ship’s owners as follows: James and Margaret £19 each, James Jnr £10, and Jane £5. There were six paying saloon passengers and a total of 260 subsidised immigrants on the vessel. One male and female and two children died on the voyage, but seven male and a single female baby were born during the journey.

Upon arrival they pitched their tent at Flagstaff Hill and after several weeks in Melbourne walked for two days to Brighton. James was looking for quality sand for his forge, but seeing only 50 people around living in shanty huts decided to return to Melbourne. Living in Great Bourke Street near the Kirks Horse Bazzaar, James set up a blacksmith and foundry, casting the first metal hinges in Melbourne. He made the bedsteads for the first public hospital as well as all the locks and hinges for The Old Melbourne Goal. Later he transferred his business to Bourke Lane where he stayed until 1846. They returned to Brighton in 1846 setting up his forge in New Street with their home set well back behind the business (due to the risk of fire).

They eventually moved to Clydesdale near the corner of North Road and Thomson Street. The house remained until the late 1920s. In nearby Cochrane Street, James and his son James Jnr purchased 20 acres of land and leased a further 100 acres. A homestead was built by James opposite the former Methodist Church; he made all the nails, hinges and locks for the new home. Roof nails were some nine inches long and hammered through the iron and curled around the rafters as it was believed Aborigines had acquired the habit of removing iron sheeting from roofs. There was still a Cochrane descendant living in the street in 1967, some 115 years later.

James and his wife were foundation members (1851) of the Bay Street Baptist Church and a trustee of the new Brighton General Cemetery from 1858 to 1876. James also nominated for the local council election in 1859 but was not successful.

James died on 3 March 1888 and with his wife Margaret (d 1885) are buried in the Baptist section of the Brighton General Cemetery (Bap*H*30) at right angles to poet Adam Lindsay Gordon’s monument. Also inscribed on the headstone is reference to their eight year old daughter Margaret who died at Mount Gambier. It appears the Cochrane family and Gordon were fairly close, with the Cochranes being involved in horse breeding, and as earlier mentioned James poetry.