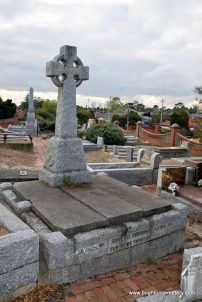 Alfred Cornish was born on 10 October 1854 at Collingwood, one of seven children to William Crocker Cornish (1815-59), building contractor and Jane née Rowell and brother to Robert (q.v.). His father William who arrived in Melbourne on board the Kent in 1852, undertook some of the most important building works during the boom of the 1850s, notably the Melbourne Post Office (1853), Customs House (1855) Parliament House (1866), the Castlemaine and Old Melbourne Goals (1857) and sections of the Melbourne-Murray railway with the ‘railway king’ John Vans Agnew Bruce (Melbourne General Cemetery). After his education at Scotch (1863) and Geelong Grammar Schools (1866-70), Cornish studied civil engineering, graduating in November 1874 where his first job was on the Colac railway; of his time at Geelong Grammar, Cornish later wrote that he “managed by good luck and moderate diligence to find myself generally near the top of the class”. For 23 years, Cornish was secretary of the Australia Club as well as honorary secretary of the exclusive The Bohemian’s club (1881-1901) formed in 1875; William Moule (q.v.) would write;

“by nature Alfred Cornish was of the happiest temperament, the dearest friend a man could have and the most capable organiser any one could desire…let us remember his cheery nature, his playful humour and his kindly good will for all mankind – most lovable of men”

In 1884, he married Eleanor née Noel, daughter of Wriothesley Noel (q.v.). Residing at 105 Mathoura Road, Toorak, Cornish died from heart disease on 7 December 1924 and was buried at the rather uncivil time of 8:30am two days later.