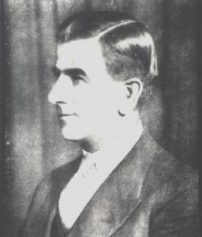 Born on 14 September 1881 at Majora, Victoria, the eldest son of Michael Nicholas a miner and Ellen née Anstee. Short of formal schooling as a result of poor health, he established himself as a grocer and later as an importer and merchant. Meanwhile, Nicholas’s brother, George Rich (1884-1960) a qualified pharmacist had succeeded along with Henry Shmith in the rush to develop the aspirin after supplies of acetyl salicylic acid from Germany became unavailable during World War I; by 17 September 1915 “Shmith Nicholas & Co” had obtained a licence to make and sell aspirin in Australia and the name ‘Aspro’ was adopted and registered.

But what was needed was an astute business mind, one able to drive the company with ambition and tenacity. Enter Alfred. With his importation business affected by the Great War, he soon joined the infant company and “ran the firm from the start as if success had already arrived”; by the end of 1917 after suffering accumulated losses, heavily in debt and heading for bankruptcy Shmith controversially sold his interest, an event that to this day still exists an uneasy truce between the families. By 1920, sales had increased dramatically as a result of the influenza epidemic and some judicious marketing (“An Aspro tablet now and then / Builds up and soothes the greatest men”) not to mention the confidence of Charles Langdon (q.v.) who as managing director of “HJ Langdon & Co” supplied the raw materials on credit while declining a share of the business.

Described as “physically frail with both a minor malformation of the foot and an under-developed lung…emotional yet serious, a fussy man…strict Methodist, someone without bravura or passion”, Alfred was the driving force behind Aspro’s expansion overseas – New Zealand (1923), England (1924), Europe (1925) and Asia (1927) before the onset of the depression; by 1934 the constant expansion had taken its toll on his health. Dominant, single minded and intolerant of others, in his final years, Alfred grew distant of his brother and they had furious rows.

A generous philanthropist who was said to have donated over £250,000 to various Methodist institutions notably Methodist Ladies’ College, he died from heart disease on 26 February 1937 aged 55; Rev C Irving Benson (q.v.) described Alfred as “a man of simple Christian character and princely generosity”. Residing at Carnbrea – 5 Harcourt Street, Auburn with a holiday home at Burnham Beeches, Sassafras, his estate was valued for probate at almost £827,000. Nicholas International was later owned by the giant Swiss multi-national Roche Holdings.