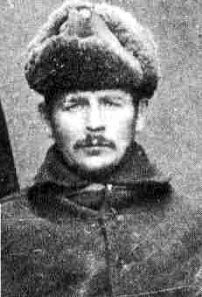 William Bertotto was born at Sandringham, Melbourne on 2 August 1874 the fourth child to Angelo (d 1928), a professional fisherman, and Caroline Bertotto (d 1927). William was brought up to a life on the sea and joined the Victorian Navy on 9 July 1900 with the rank of training seaman at a time when the colony was involved in two wars, the Boer War and the China War (Boxer Rebellion). William chose to serve with the Victorian Naval Contingent that was posted to China to help suppress the northern Chinese peasants, who were endeavouring to overthrow foreign rule. Prior to his departure, a farewell function was organised the day after he joined the navy by the “proud Councillors and citizens of Sandringham”, where he was presented with a silver Rotherham watch and chain as well as a real sailor’s knife with a marlin-spike.

On Monday 30 July 1900, the contingent embarked onboard S.S Salamis where they sailed for Sydney arriving at Port Jackson on the following Saturday. There was a decided warlike air abroad throughout the vessel and the Victorians, upon whose caps were written “HMS [sic]Cerberus”, saluted as their superiors passed through the quarters. After visits by local dignitaries, including the Governor Lord (seventh Earl) Beauchamp (1872-1938) and Sir William Lyne (Waverley Cemetery), Transport 105, formerly SS Salamis left Cowper Wharf on 7 August and sailed the following day for China. On Sunday 9 September, Salamis arrived on the war front where she joined the great fleet of some 130 warships and transports from many nations which had assembled twelve to fifteen nautical miles off the mouth of the Hai Ho. The Australian contingent was to be quartered as one force in Tientsin committed to securing and holding the land in that area and later at Pao-ting fu, one hundred or so miles to the west of Tientsin. The Victorian Naval Contingent left Australia with blue serge uniforms and greatcoats, but these were quite inadequate for the severe winter conditions. The British obtained some winter clothing from the Canadian Government and this was to prove invaluable.Bertotto’s diary, written in superb copperplate handwriting, records some of his experiences and events which he witnessed during his time in the field in Tientsin and Pao-ting fu and also describes the lighter side of life in wartime – the holding of a “banyan”, a Royal Australian Navy term used to describe a party where sailors from a ship anchored offshore, go ashore to cook a meal and drink beer on a deserted tropical island. The entries in his diary also have a ring of optimism about them, suggesting strength of mind and body, and the ability to survive under threatening conditions which can be attributed to Bertotto’s upbringing in the bracing sea air of Sandringham. By the beginning of 1901, when hostilities had subsided, the Victorian Contingent’s role was limited to that of an occupation force and they departed on 26 March 1901 sailing onboard SS Chingtu arriving at Port Jackson on the evening of 25 April with quarantine flag flying.

William Bertotto returned home to Sandringham and was promoted to the rank of able seaman on 6 September 1901 remaining with the Victorian Navy until 1907 when he was discharged at his own request; his certificate of service was signed by Commandant WR Creswell (q.v). After discharge, Bertotto once more pursued a career as a professional fisherman at Sandringham and resided with his family at 5 Moor Street until his death on 24 April 1946; he did not marry. He was buried two days later in the Brighton General Cemetery (RC*C*114).