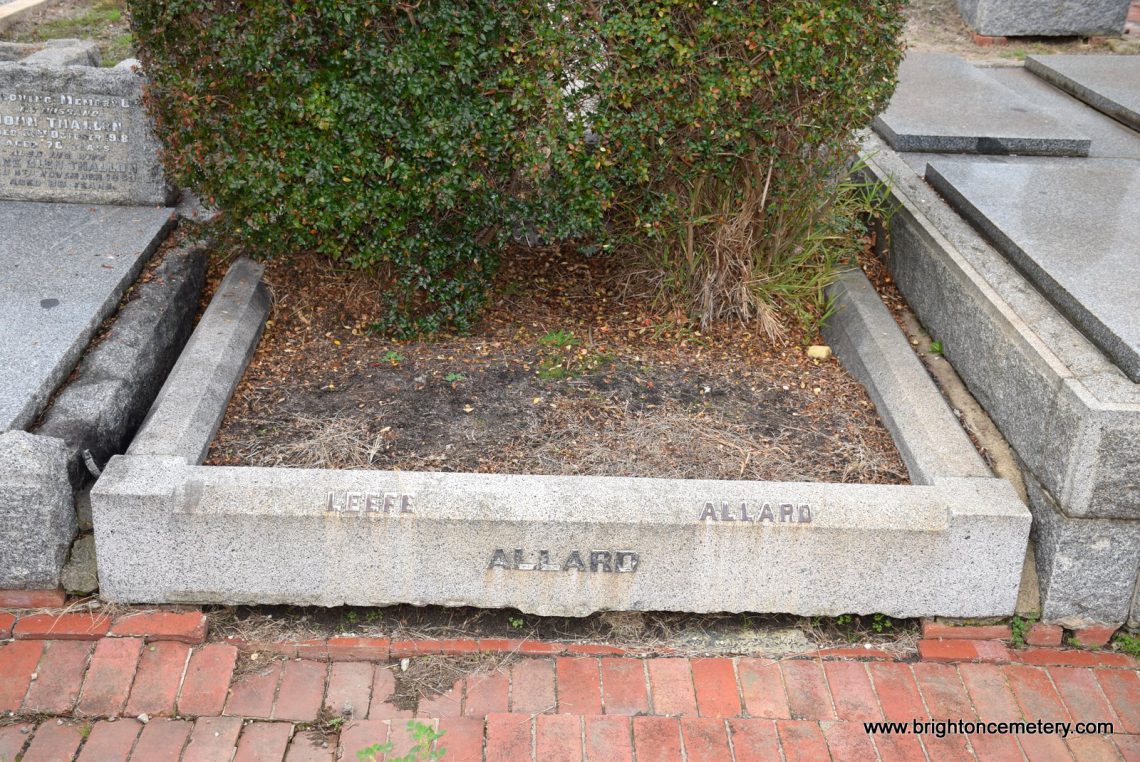 Born on 11 October 1859 at St. Kilda, Melbourne one of six children to A. M. Allard. After his education at St. Kilda College he worked as a junior clerk at the Port Melbourne branch of the National Bank of Australia but resigned at the age of 22 to become an estate agent founding “WH Allard & Co”; little is known of the period during the land boom of the 1880s and ’90s. In 1914 Allard amalgamated his interests with the firm founded by WL Baillieu (1859-1936) which was given to his brother Arthur Sydney (1872-1943) in 1904 to manage; Arthur’s son Kingsbury (q.v.) later became a director. The company, “Baillieu Allard Pty Ltd” was widely known throughout Australia and was responsible for the exchange of some of the most expensive properties in Melbourne.

Allard was an original councillor of the “Auctioneers and Estate Agents’ Association (Victoria)”, and was “regarded as one of the heads of his profession…held in high esteem among reality investors for his sound judgment of freehold value”. Locally, Allard was elected as a councillor of the Brighton City Council (1895-1911) and served as Mayor in 1902-03 and “did much towards making the seaside municipality one of the best managed in the metropolitan area”.

He resided at Roslyn – 132 North Road, Brighton where he died of exhaustion on 13 September 1927; in 1884 he married Florence née Wilson. A keen sportsman, active Mason with the Brighton Lowry Lodge, and member of the North Road Presbyterian Congregation, Allard’s funeral was one of the largest seen in Brighton for many years with some 600 mourners. The Herald noted that Allard “presented the unusual and happy combination of good clubman and churchman, a patron of sports and a Mason”. A son was killed at Gallipoli during the Great War.

Alexander Alexander is described in the The Age obituary as “a very old Melbourne identity” as managing director of the tobacconist firm “Alexanders Proprietary Limited” and “one of the pioneers of the tobacco trade in Melbourne”. Born in West Melbourne, Alexander was a “prominent member of the Master Tobacconists’ Association” and a past president of the Percy Walker Old Boys’ Association, trustee of the Jewish Mutual Aid Society, a member of the Masonic Order and “closely associated with Jewish charities”.

Residing at Ailsa – 62 Kooyong Road, Malvern, just before his death, he had just returned from a trip to England. He died on 17 August 1925 at the age of 69 survived by his wife Hannah (d 1943); Rabbi Jacob Danglow (St. Kilda Cemetery) conducted the service. 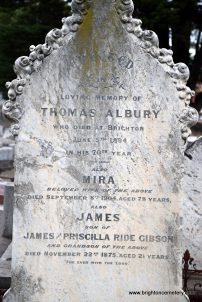 Thomas Albury was born on 30 September 1824 at Basildon, Berkshire, England the son of Joseph Albury and his wife Lucy née Pocock. A carter from Brighton, on 19 March 1855, he was a juror at the treason trial of Timothy Hayes (1820-73) who was arrested on 3 December 1854 near the vicinity of the Eureka Stockade; defended by Richard Ireland (St. Kilda Cemetery), Hayes was acquitted of the charge. 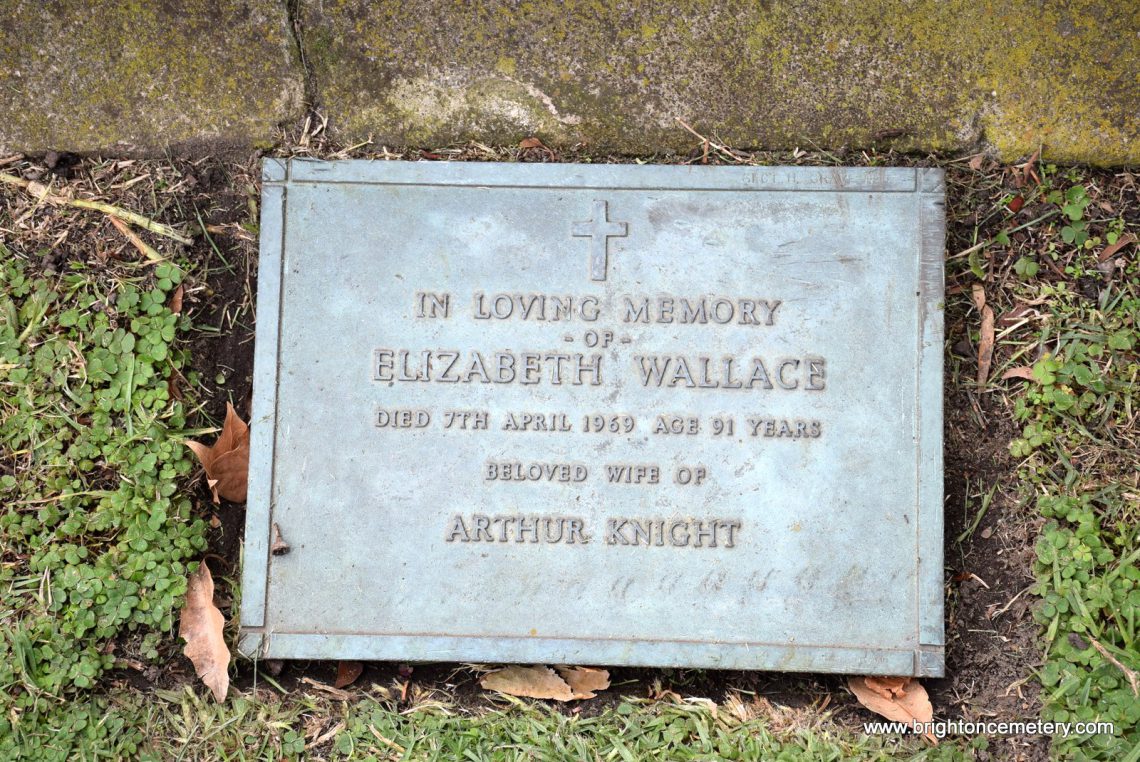 Lizzie Ahern who was a well-known socialist propagandist during the early part of the 20th century was born on 19 October 1877 at Sago Hill near Haddon, south-west of Ballarat, Victoria one of twelve children of Irish-born Edmund Allen and his wife Eliza née Kiely. Joining the Victorian Socialist Party in 1905, she soon became one of the party’s most effective speakers. Her speeches on the banks of the Yarra river were said to have been so popular, women would happily lose a day’s pay to hear her views; in November 1906 she was arrested and jailed for ten days for obstruction.

A staunch defender of freedom of speech and women’s rights, in 1916 Ahern joined the Australian Labor Party and served on the Trades Hall Council as a delegate for the Caterers’ Employees’ Union; she was bitterly opposed to conscription. Described as “energetic, courageous and determined to the point of stubbornness”, Ahern served on the executive committee of the Victorian Socialist Party 1906-10, 1910, 1917-18. Her husband Arthur Wallace (1879-1952) had an undistinguished parliamentary career as Labor member for the seat of Albert Park (1919-27, 1929-32), and with the South Melbourne Council (1929-37) serving as Mayor in 1934.

Residing at 68 Barrett Street, Albert Park, she died on 7 April 1969 survived by a daughter. 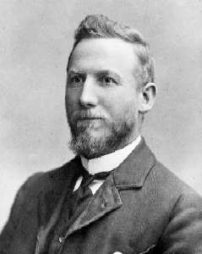 Born in South Yarra, son of William Adamson and Isabella née Bruce and educated at Brighton Grammar School. In the 1870’s he took over the business of “McCann, Adamson & Co”, stock and station agents and from 1889 in partnership with Noble Powell and Walter Armstrong; from 1912 he was managing director of “Adamson, Strettle & Co” (Bourke Street). The firm was responsible for the shipment of horses, horse feed and equipment to Calcutta and Marseilles for the British Government during the First World War. Described as “an able and constructive administrator”, Adamson served in politics as a Brighton City Councillor (1895-1913, Mayor 1901-02), and in State Parliament from 1910 to 1922, notably as Minister for Public Works (1915-17) in the (Sir Alexander) Peacock (Creswick Cemetery) ministry; the Herald commented that “in Cabinet he was helpful in constructive work, and as a critic of legislation. His breezy style assisted to keep Cabinet meetings cheerful”.

A keen follower of the track, he owned Charlectoe which had some success, winning the Cooee and Plenty Handicaps at Moonee Valley and the VRC Royal Handicap at Flemington. Described as “a calm, self-contained speaker, and one who had the courage of his opinions”, Adamson died on 10 June 1926. A prominent Freemason, among the mourners were OR Snowball (q.v.) and William Allard (q.v.). He resided at Thyra – 57 Wilson Street, Middle Brighton, designed by Lloyd Tayler (q.v.) in 1883. 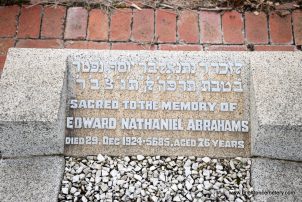 Bookmaker Location: Jewish*H*94 For over fifty years a bookmaker on the turf, Abrahams was known as ‘The Count’ and during his time, one of the leading bookmakers in Australia. Abrahams...