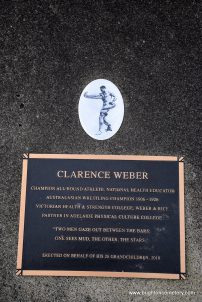 Born on 27 March 1882 at Brighton, Melbourne to a large family of German-born Robert Weber, a market-gardener and Eliza née Head; details of his education is unknown but he distinguished himself early in his career as a competitive sportsman in sprints, hurdles (1900) and cycling (1902).

Weber was later attracted to the loosely termed “physical culture movement” then gaining popularity but still largely a freak novelty, and around 1908 opened a business at 155 Elizabeth Street, Melbourne – “Weber & Rice Health and Strength School” which soon became part of the Melbourne sporting scene; ‘Professor’ Weber taught the fine art of “wrestling, correct breathing and poses plastiques”. At a time when fitness was for the sporting fraternity, Weber was beyond the times in a brave attempt to see a typically sedate mainstream public take up a more active life; he also helped to create an avenue for aspiring sportsmen and future sporting coaches.

Described as “six feet (182.9cm) tall and fourteen stone (88.9kg), beautifully portioned, handsome as well as strong”, he resided at 2 Victoria Crescent Mont Albert where he died suddenly from heart failure (coronary occlusion) on 20 November 1930, aged 48; Weber’s second wife, Ivy née Filshie (1892-1976) widow of Thomas Mitchell (d 1917) whom he married on 7 March 1919 was the second women elected to the Victorian Parliament and the first at a general election (1937).