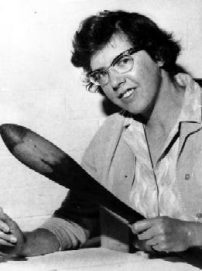 Eldest of four children to Richard Eggleston (q.v.) and educated at Presbyterian Ladies’ College and Tintern Girls’ Grammar School, Eggleston studied Law at Melbourne University (LL.B, 1956) and later at the University of California (LL.M, 1958); her interest in social justice was sparked during a visit to the Navajo Indian country in America. Returning to Melbourne in 1961, four years later she became the first doctoral candidate of the Monash University Law Faculty (Ph.D, 1970); her thesis on Aborigines and justice later published as a book – “Fear, Favour or Affection” (1976) – was widely acclaimed by reviewers as “a landmark in Australian legal and social studies” highlighting the systematic discrimination faced by indigenous Australians from arrest to sentencing. Described as “gentle and unassuming, with a deep-rooted and burning sense of injustice”, in 1971 Eggleston was appointed director of Monash University’s Centre for Research and the following year founded the Victorian Aboriginal Legal Service.

She died of cancer at the Peter MacCallum Cancer Institute on 24 March 1976 aged 41 after a long illness; known as ‘Malpa’ (“soul friend”) to the aboriginal community, a memorial service was held at Monash University to “sing into dreamtime” a person who in the 1970s achieved more towards Aboriginal equality and injustice in a short by productive life.