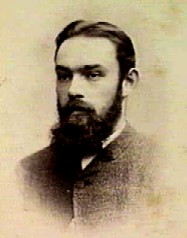 Born on 17 November 1843 in London, the son of William Carrington, doctor and Mary née Green. Migrating to Victoria in the 1860s after the lure of gold, Carrington soon turned to his earlier training as an illustrator and began working as a cartoonist for Melbourne Punch (1866-87), the satirical political and social newspaper of the time.

Founded in 1855 by Frederick Sinnett (Melbourne General Cemetery) and Edgar Ray, Carrington and Punch were made for each other; his whimsical humour became the bane of many political leaders where his instinctive manner to lash out made “every stroke of the pen a stroke of the sword”. The hapless (Sir) Graham Berry (Boroondara Cemetery) became the chief focus of Carrington’s venom during a tumultuous period in Victorian politics (1877-81) – when Berry’s ‘embassy’ returned from England showing a surplus of 6d, the expression “magic sixpence” become a byword for many years. Signing his cartoons with the signature “TC”, Carrington was one of the first to pioneer the influence of the press over political opinion via the art of caricature in a manner that was so genial the ‘victim’ often enjoyed the portrayal as much as the public. In 1880 he bought a one-third share in the newspaper, but the following year sold out and in partnership with James McKinley (q.v.) published the short-lived World; he later returned to Punch under the control of James’ brother Alex (St. Kilda Cemetery) and remained until 1887.

Carrington’s most enduring illustrations were the series of Kelly pictures between 3 and 31 July 1880, illustrating the capture of the Kelly gang being one of five members of the press who travelled on the special train to Benalla on 27 June 1880 only to find himself a first-hand witness to the siege at Glenrowan; it was Carrington who bandaged the wound of Superintendent Francis Hare (Melbourne General Cemetery) after he had been shot by Ned Kelly in the opening salvo and later gave evidence to the Royal Commission on 7 June 1881. He later noted after police had burned down the Glenrowan Inn that the bodies of Dan Kelly and Steve Hart “could now be plainly seen amongst the flames, lying nearly at right angles to each other, their arms drawn up and their knees bent”.