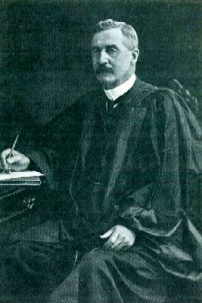 Born in Kingston, Jamaica, West Indies eldest son of Joseph Crowther and Mary née Bebb. The family migrated to Melbourne in 1856 and went to Horsham the following year; his father was a teacher-headmaster in country Victoria (1858-77).

After matriculating at Wesley College (1872) and later graduating at Melbourne University (BA, 1876; LL.B, 1878; MA, 1879; LL.D, 1884), Crowther became master of the matriculation form at Hawthorn Grammar School (1879-81). On the success of the matriculation results gained at Hawthorn, he founded Brighton Grammar School on 14 February 1882 in a rented former coach house in New Street. Just eight students were enrolled on the first day; by the time of his death, some two thousand boys had passed under his watchful eye including (Sir) Stanley Argyle (1867-1940), (Sir) Harold Clapp (1875-1952), (Sir) Trent Champion de Crespingy (1882-1952), John Duigan (1882-1951) and Albert Thurgood (q.v.). Many remembered an effortless strict disciplinarian well-liked by all who rarely used the cane rather preferring “long multiplication sums that had to be proved by subtraction”.

An ardent supporter of private schools, Crowther was a foundation member of the (Incorporated) Association of Secondary Teachers of Victoria with Otto Krome (q.v.) formed in 1904 to combat moves by the government to establish high schools and technical colleges that threatened the very existence of many private schools. He was critical of Frank Tate’s (Box Hill Cemetery) ‘state socialist’ agenda arguing against the centralisation and rigidity of a state education system; with the passing of the Education Law Further Amendment Act (1910) some 337 private schools eventually closed which existed between 1885 and 1910. Locally, Crowther was for over thirty years churchwarden of St. Andrew’s and represented the church on the Brighton General Cemetery Trust (1902-18).