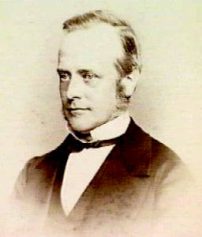 Undoubtedly Victoria’s most influential citizen of the colonial era, Higinbotham was born on 19 April 1826 in Dublin, Ireland and graduated at Trinity College (BA,1849; MA, 1853); he worked for a time with the London Morning Chronicle and was admitted to the Bar before arriving in Victoria in March 1854.

A man beyond the times, Higinbotham was an independent thinker destined for greatness from the outset. As editor of The Argus (1857-59) his views were both radical and measured; he favoured religious education that enforced the moral duty to the benefit of society (June 1857); supported state aid to schools until they were financially secure (July 1859); believed in settlements in the country to solve the unemployment crisis (Dec 1858); favoured reconciliation with indigenous Australians (Feb 1859); and supported universal suffrage (May 1857). In May 1861 he entered state politics as one of the “liberal bourgeois” representing the state seat of Brighton in the Legislative Assembly (1861, 1862-71) and as Attorney-General (1863-68) in the (Sir James) McCulloch (1819-93) ministry, he was acknowledged as the leading radical. He argued for free trade, assisted immigration provided they could support themselves and parliamentary salaries.

But as a staunch democratic constitutionalist, noted for his principle against interference by the Colonial Office in London, Higinbotham upheld the notion of responsible government and set many precedents during his time as Attorney-General: when the noted Supreme Court judge (Sir) Redmond Barry (Melbourne General Cemetery) wrote to the Governor Sir Charles Darling in 1864 requesting leave to Sydney, Higinbotham argued that “no officer of his Department” had a legal or constitutional right to allow a representative of a foreign government to decide matters relating to the Crown; and when the Confederate steamer Shenandoah sought permission to berth at Hobson’s Bay for repairs, the Governor was advised against the wishes of the Colonial Office to seize the ship as a pirate, Higinbotham arguing that the role of the Governor was to consult ministers and inform the Imperial Government, and not to dictate political decisions upon the Crown. On 4 September 1866, Higinbotham chaired a Royal Commission on the education system and the vexed question of church-state relations. He supported a compromised secular state-based education system allowing for religious instruction, but the Bill failed to win support and was withdrawn on 4 June 1867 leaving Higinbotham bitter and disappointed.

But like many great men, Higinbotham was a man of contradictions: “shy yet firm, gentle yet ferocious, personally courteous yet impersonally acrimonious”; loved by the working man and admired by the higher classes for his lack of snobbery and courtly elegant manners, he was a man without class distinction who in later years refused a Knighthood (“a base, contemptible distinction”). In July 1880 he accepted an appointment on the Supreme Court Bench (1880-92) later becoming Chief Justice (1886-92); his crusade against Colonial interference and the upholding of responsible government was maintained on the Bench notably in May 1884 with the sentencing to death of Henry Morgan which Higinbotham argued that he was answerable only to the Attorney-General and refused to report the case to the Governor. As a judge, he displayed the same characteristics throughout his life – indefatigable and hard working while attending to the minute detail of each case; “his judgements exhibited lucidity, elegance and usually economy”.

An intensely private man, Higinbotham’s funeral was a family affair with the exception of the trade unionist Benjamin Douglass (Melbourne General Cemetery) who in 1890 urged Higinbotham to controversially donate to the maritime strike fund while Chief Justice – to this day the Seamans’ Union lay a wreath on the anniversary of his death on 31 December 1892. Alfred Deakin (St. Kilda Cemetery) described Higinbotham as;

“just to a hair’s-breadth and generous to a fault…as a speaker he was at once cultured, simple and effective, passionate yet self-restrained”.