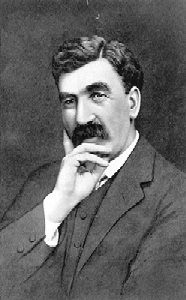 The son of Marshall Hall and Mary née Mammatt, Marshall-Hall was born in London on 28 March 1862 and educated locally. In spite of parental disapproval and a hearing disability, Marshall-Hall’s love of music was instilled at an early age by his paternal grandmother and his musical studies was spasmodic, limited and largely self-taught; in late 1883 he spent less than a year at the Royal College of Music before his appointment as organist and choirmaster at Newton College, South Devon.

When the wealthy philanthropist Francis Ormond (Geelong Eastern Cemetery) endowed £20,000 to establish a chair of music at the Melbourne University in his name, Marshall-Hall was elected first Professor of Music (1890-1900, 1915) after a period of protracted indecision from the selection committee and he arrived in Melbourne 7 January 1891. Rather than a conservative academic in the “organist-pedagogue” mould, Marshall-Hall was controversial to the core – a flesh and blood bohemian, an avowed atheist and a staunch socialist. Not surprisingly, he soon embroiled strait- laced Melbourne in controversy with his bohemian ways and attacks on social norms and religion notably through his verses in “Hymns Ancient and Modern” (1898); the arch-conservative The Argus launched into a ferocious campaign against Marshall-Hall. One such offering was “Teetotalism”:

“D’ye think that I’ll go fast and pray,
For you, you drunken swine?
No!-you be dammed in your own way,
And I’ll be damned in mine”.

Musically, Marshall-Hall had many admirers who considered him a genius. In 1892 he founded the Marshall-Hall Orchestra (1892-1912) and gained a reputation as a first class conductor performing more than 100 concerts, notably “Stella” (1912). Later with William Laver (q.v.) he established what eventually became the Melba Conservatorium of Music in early 1895 as a solution to the lack of academic studies; he abhorred examinations where the emphasis was instead on emotion not technique. Described as “tall, dark, bluff-mannered, idealistic” and somewhat flamboyant, the forces of conservatism aided with a whispering campaign against immoral conduct succeeded in ousting Marshall-Hall from the Ormond chair in June 1900. But all was forgiven and he was later re-appointed in 1915 after the death of Franklin Peterson (Melbourne General Cemetery) only to pass away suddenly on 18 July 1915 at Mount St. Evin’s Private Hospital, Fitzroy survived by his second wife Catherine née Hoare (d 1940).

(Image reproduced with permission from the University of Melbourne Archives, UMA/I/1220)