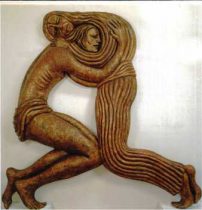 Guy Martin à Beckett Boyd was born on 12 June 1923, the third of five children to Merric Boyd (q.v.) and Doris née Gough (q.v.). He and his brothers and sisters were encouraged and inspired by their family in their creative and artistic lives and all became artists. The garden of their rambling home Open Country was full of trees and lent itself to an appreciation of nature.

Guy’s passion as an environmentalist and his concern for the preservation of nature sprang from these early days. He learned the art of pottery from his father, whose studio was at their home. He was also influenced by his paternal grandparents, Emma Minnie (1858-1936; Fawkner Memorial Park) and Arthur Merric Boyd (1862-1940; Fawkner Memorial Park) and stayed with them frequently in their home by the beach at Sandringham. At the age of twelve, he realised he had a particular ability for sculpting and was already creating mature and evocative pieces of clay and plaster by the age of fourteen. During the Second World War, as a pacifist, he refused to bear arms. He found a place in the army teaching pottery to repatriated soldiers in NSW. When the war was over, he established the “Martin Boyd Pottery” in Sydney, creating popular and decorative pieces. In 1952, he returned to Melbourne and married Phyllis née Nairn. As a partnership, they established “Guy Boyd Pottery” and had seven children.

In 1965, Guy began sculpting full-time, creating a reputation as Australia’s foremost figurative sculptor. The family moved to Brighton where Guy was the instigator of the Brighton Foreshore Protection Society. He fought numerous battles for conservation including protecting the Brighton foreshore from a boat marina (“beaches are for families”), the improvement of the beach area, and the preservation of the Brighton bathing boxes. He fought against a proposed oil pipeline to be put under Port Phillip Bay and against the damming of the Franklin River (Tasmania), among other environmental issues. These campaigns were all successful. He was characteristically courageous and outspoken against injustice and was instrumental in seeing Lindy Chamberlain freed from jail and exonerated.

Guy and Phyllis moved to Canada for some years in the ‘70s, where he achieved critical acclaim for his work both there and in America. He returned to Australia, purchasing the former home of his grandparents in Sandringham. He is represented in numerous public collections, among them universities, The National Library of Australia, and Sydney International Airport. His themes for sculptures were of simple gestures, beach scenes, dancers, aboriginal myths, biblical themes and the image of mother and child. His most prominent piece in Brighton is “The Prodigal Son” a large wall relief at St. Andrew’s Church, Brighton, which was completed and dedicated near the end of his life.

Guy died of a sudden heart attack in Brighton, aged 64.