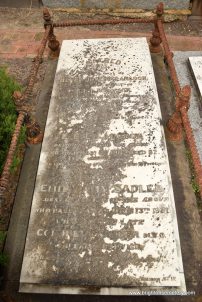 For so prominent a merchant as Henry Langdon, who founded the firm “HJ Langdon & Co Pty Ltd”, it is surprising the newspapers of the day did not report his death on 17 October 1898. Henry Joseph Langdon was born in London on 14 October 1822 and educated where “he received his commercial training, first in the mercantile house of August Faber and Company, of Mark Lane and later in a large East India house”. In 1852, he migrated to Australia with his wife and eldest son Montague arriving on the Marlborough in November 1852 and immediately serviced the Gold Rush with supplies of luxury household goods. Two years later, Langdon co-founded the firm “Josephs, Langdon and Company”, china merchants; some years later his partner returned to China and Langdon carried on the business as “HJ Langdon & Co Pty Ltd”, merchants and importers. In “Henderson’s Australian Families”, published in 1941, the writer states that;

“Mr Langdon held an honourable and important position in the mercantile life of Melbourne, and conducted his business on the high level of that of the English business houses in which he gained his early experiences”.

Locally, on 14 June 1870, Langdon purchased some twenty acres of land fronting Hawthorn Road known as Ringwood which he renamed Rosecraddock, “taken from the surname of a family with whom the Cornish branch of the Langdons had intermarried”. The property was believed to have originally been a Crown grant by purchase to Edward Warne on 20 October 1854 and passed through a succession of owners – GW Harris (1857), Samuel Tropp (1860), JA Jamieson and lastly J Connell. The house and part of the land is still nestled hidden at the end of Rosecraddock Place; much of the land was subdivided by descendants between 1918 and 1921. A Justice of the Peace, for some years, Langdon was a member of the Caulfield Roads Board before it formed into a Shire. He was also a foundation member of the Australian Club. He was survived by his cousin, Elizabeth (d 1911) whom he married at Stonehouse Chapel, Stonehouse, Devon, England. A son, Charles Petley (q.v.) went on to become managing director of the firm which today specialises in supplying food and health ingredients as “Langdon Ingredients”; the firm celebrated their 150th anniversary in November 2002.