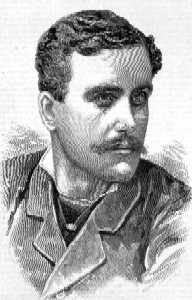 Born John Norman Lett on 20 May 1848 in Collins Street, Melbourne, the son of Richard Lett, a brickmaker and Jane née Williamson; he first earned a living as a clerk and then as a tea-taster and blender. Vernon’s first appearance on stage as a tenor singing “A Bird There Sat on a Hawthorn Spray” caught the eye of the theatre entrepreneur George Coppin (1819-1906) when he pulled a trick on the violinist Johann Kruse (1859-1927) (“My boy, you are a comedian”); and later in 1873 in his first comic opera in a season of “Barbie Bleu” as ‘King Bobeche’. By 1874 Vernon had formed his own company with a small group of singers and toured Australia, New Zealand, India, China, England, America, Singapore and in 1877 to Japan becoming the first European actor to appear in a Japanese theatre.

On his return to Australia Vernon achieved his greatest fame through his performances in the Gilbert and Sullivan comic operas; such was his fame that he was able to choose “by inheritance of right and merit” any part at a time when the principals were frequently changed. He first played ‘Major-General Stanley’ in “The Pirates of Penzance” (May 1881) followed by ‘Bunthorne’ in “Patience” (December 1881) at the Royal Theatre in Sydney, ‘Ko-Ko’ in “The Mikado” (November 1885), ‘King Hildebrand’ in “Princess Ida” (July 1887), ‘Shadbolt’ in “Yeoman of the Guard” (April 1889) and finally as ‘Don Alhambra’ in “The Gondoliers” (October 1890) at Princess Theatre in Melbourne.

Twice married to actresses – Mary née Walker (d 1905) and Lavinia néede Loitte (d 1962) – he died at a private hospital in Windsor on 26 July 1921 and was buried near Adam Lindsay Gordon (q.v.) whom he held a lifetime of admiration. High praise came from The Age who reported on his death that “the appreciation in which the late Mr Howard Vernon was held by Melbourne theatregoers will live as long as the Gilbert and Sullivan operas” while Alfred Cellier the conductor of the original orchestra at Savoy Theatre in London who worked with WS Gilbert and Sir Arthur Sullivan spoke of “Vernon’s impersonations stating that they compared most favourably with anything that had been seen in London”.