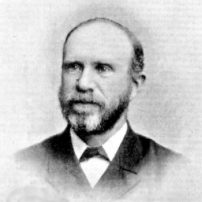 Born in Millport, Scotland on 3 May 1845, the son of Matthew Campbell (d 1863), an engineer, Campbell spent his formative years in Ballarat where his father tried his luck on the goldfields. It was said that they were amongst the first to enter the Eureka Stockade after the carnage of 3 December 1854; he later reported that he saw the dead bodies of the miners laying inside the stockade. With an adventurous spirit and being financially secure after his father’s death in 1863, Campbell travelled widely overseas in 1870-71 (Europe, Russia, Vatican City and America) and 1886-87 when he covered some 47,000 miles in eighteen months visiting Sri Lanka, India, Singapore, Java, Hong Kong, China, Korea, Japan, Russia, and Europe before returning home.

His political career as a member of the Wellington Province in the Legislative Council (1882-85) and later MLA for Benalla and Yarrawonga (1892-93) was a paradox: a free-trader he supported anti-sweating measures, and while strongly in favour of opening the land to the small farmer, he opposed the principle of ‘one man, one vote’ believing it to be against the interests of landholders. In 1883 he introduced a private bill designed to suppress brothels and to raise the age of consent to sixteen. Re-entering Parliament in 1892 in vastly different circumstances, Campbell served an uneventful period as Minister for Public Instruction under (Sir) James Patterson (Melbourne General Cemetery) until his death from stomach cancer on 16 September 1893.

Writing to the Melbourne Daily Telegraph during his travels overseas in 1886, Campbell said;

“There are dreamers who see visions and dream dreams about the future of aerial navigation. I confess I love them and find myself indulging in pleasant reveries of the time when men, starting in the morning from Melbourne, well-nigh racing the sun, will land in London in the evening, or the next day at the farthest”.