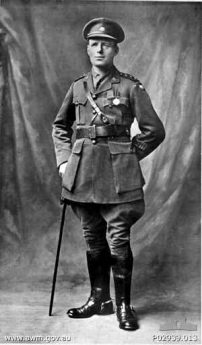 One of four recipients of the Victoria Cross buried at Brighton General Cemetery, James Ernest Newland was born on 22 August 1881 at Geelong, the son of William Newland and Louisa née Wall. He enlisted as Private 2354 4th Battalion, Australian Commonwealth Horse for service in the Boer War under the command of Lieut-Colonel George Johnston (q.v.) arriving in Durban just over a month before the end of hostilities and was soon back in Australia. He served for a period in the Royal Australian Artillery (1903-07) and later became a permanent member of the Instructional Staff of the Military Forces (1910-14).

Enlisting with the Tasmanian section of the 12th Battalion on 22 August 1914 as regimental quartermaster sergeant, Newland landed with the battalion at Gallipoli and was wounded on that fatal day. A month later, promoted to 2nd lieutenant he re-joined the unit and in early June left for Egypt to take charge of the battalion’s transport section. It was in Egypt that Newland was promoted to captain and appointed Adjutant in March 1916, but would have been spared the unfortunate task of reorganising the battalion by having to split the unit in order to form its sister battalion – the 52nd.

In France, during the battalion’s first major battle of the war – the bloody battle of Poziéres and later Mouquet Farm between July-August 1916 – Newland commanded ‘A’ Company and was recommended for the Military Cross, but was instead mentioned in despatches “for conspicuous courage, leadership and organisation”. After a brief interlude with Headquarters of the 2nd Brigade (Dec 1916-Feb 1917), he returned to his old post and fought in the battalion’s operations on the Hindenburg Outpost Villages where he was wounded in late February. He again returned in April 1917 where the 3rd Brigade was involved in a series of sharp engagements on the retiring Germans. It was here that Newland was awarded the Victoria Cross for “most conspicuous bravery, and devotion to duty in the face of heavy odds, on three separate occasions” in what was one of the great leaderships displays of the war, thus becoming with Sergeant John Whittle VC (Rookwood Cemetery), the only permanent officer of the AIF to be awarded the VC in the Great War.

On the first occasion he led a bombing attack against a strong-point under heavy fire. At dusk the Germans led a ferocious counter-attack, and “by personal exertion, utter disregard of fire, and judicious use of reserves, he succeeded” in holding the position. Six days later, at Lagnicourt, the Germans launched yet another counter-attack and until outflanked, retired for a last stand, and in spite of repeated attacks, he led the unit until reinforcements arrived as the citation said “with tenacity and disregard for his own safety”. The next month during the Second Battle of Bullecourt, he was wounded for the third time and eventually invalided home to Australia in July 1917 and discharged the following March. He retired from the army in 1941, but served on the home front during World War II.

Residing at 54 Briggs Street, Caulfield, Newland suddenly died from heart failure on 19 March 1949 at the age of 66; his medals spanning three conflicts can be seen at the Australian War Memorial, Canberra.