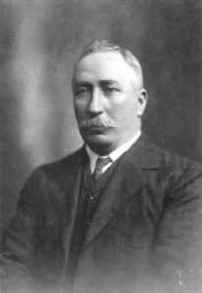 Born at Bendigo on 29 October 1864, the son of Patrick O’Hara, a teacher and Mary née Connelly; a gifted student, his education by nonetheless difficult and was sustained by his winning a number of prizes in mathematics, poetry and being awarded a scholarship at Ormond College (BA, 1886; MA, 1888).

A brilliant scholar, O’Hara went on to teach briefly with the Christian Brothers and later as lecturer in mathematics and physics at Ormond. “Short, stout and lively”, in 1889 he became co-principal with Thomas Palmer (1858-1927) of the revered South Melbourne College (1889-1917); Palmer later sold his share to O’Hara in 1893 during the height of the financial depression. One of the most progressive institutions and a breeding ground for a generation of leaders, O’Hara changed the school to co-educational and both boys and girls encouraged on equal terms; with the students priding themselves on being an educational elite, the college sustained a remarkable record in matriculation examinations, thanks largely to O’Hara’s gift as an outstanding teacher.

Described by The Argus as “one of the best known of Australian poets”, today O’Hara’s works such as “Songs of the south” (1891), “Lyrics of Nature” (1899), “Odes and Lyrics” (1906), “A book of Sonnets” (1902) and “Poems of John B. O’Hara” (1918), are virtually unknown; critics “praised his perfect metrical ear, his melody and his mastery of form”. Probably his best known poem, “Happy Creek” was popular to two generations of Victorian schoolchildren.

Forced into retirement by ill-health, O’Hara closed the college in 1917 and resided at 98 Beaconsfield Parade, Albert Park where he died from kidney failure on 31 March 1927; on 3 December 1910 he married ex-student Agnes née Law.

(Image by permission of the National Library of Australia, nla.pic-an23479393)