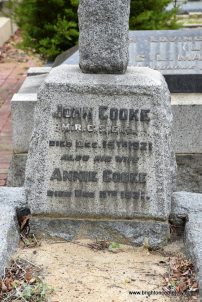 John Cooke was described by The Argus obituary as being born in London in 1850 where he studied medicine graduating MRCS (London) and in 1871 was appointed base surgeon at the London Hospital. At the conclusion of his term, he visited Australia for a trip but decided to settle in Victoria. In 1873 he was appointed resident medical officer at the Alfred Hospital and three years later went into private practice at 153 High Street, Prahran, but retained his connection with the Alfred as honorary surgeon, a role he also carried out for some years with the Melbourne Hospital.

Described as “a well-known Prahran practitioner”, he died while attempting to board a moving train at Armadale railway station on 15 December 1921 (the 9:50am train to Mordialloc). While the carriage was slowly moving, his foot slipped and he fell between the footboard and the platform. Before the train could be stopped, he received injuries and died on the way to the Melbourne hospital. His wife Annie died in 1931.