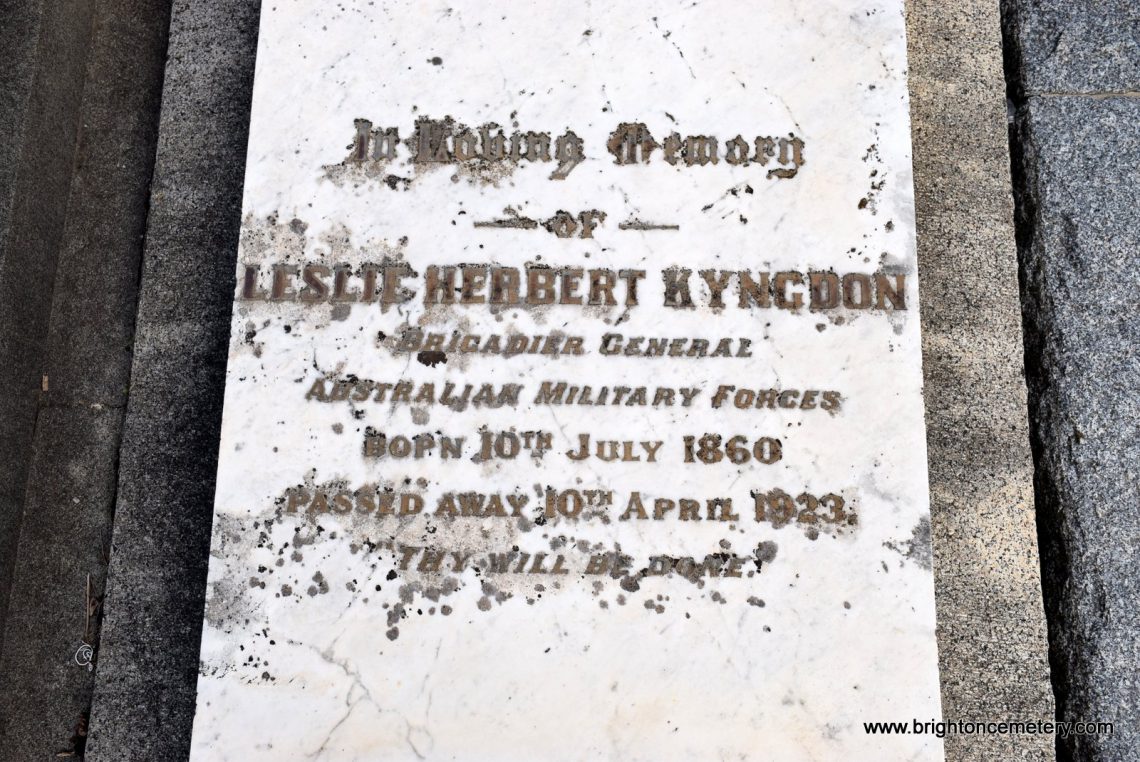 Born in Exeter, Somerset, England on 10 July 1860 to a large family and educated locally at Whitgift School, Croydon, Surrey before the family migrated to Sydney in 1878.

Two years later he was commissioned with the rank of 2nd lieutenant in the New South Wales Volunteer Forces and served with the Artillery later promoted to captain in 1884. On a wave of Imperial patriotism when news was received of the death of General Charles Gordon in February 1885, New South Wales offered to send two batteries of artillery and a 522-strong battalion, being the only colony whose offer was accepted; Kyngdon commanded ‘D’ Company of the infantry battalion but saw little service when the contingent arrived late March 1885 taking part in the advance on Tamai. Upon returning, he transferred to the permanent forces serving from November 1885 to 1896, before being posted overseas for six months with the Royal Artillery. At the time of the Boer War, Kyngdon then adjutant of the 2nd Garrison Artillery became a Special Service Officer, and arriving in Cape Town in February 1900 was attached to the Royal Artillery, where he served as a railway staff officer in the Cape Colony and Orange River Colony returning in December that year.

Kyngdon served in various positions after Federation: staff officer with the Queensland, New South Wales and Western Australia Artillery units (1902-05); Commander of Thursday Island (1906-08); and Commander of Royal Australian Artillery, coastal defences along the eastern seaboard (1910-16). Promoted colonel in April 1916, during World War One, he was mentioned for meritorious service on the home front as chief inspector of Coastal Defences (1916-19) his final position before finally retiring his sword in November 1919 with the honorary rank of brigadier-general. At a farewell dinner held in his honour at Scot’s Hotel, Melbourne, he was acknowledged as the sole surviving Australian officer of the Sudan campaign, his war service spanning some forty years and three conflicts involving Australian troops; he was much respected in the army as ‘Gruffy’ though his bitch ‘Nettle’ did much to instil fear in his junior officers by sleeping at the entrance of the officers’ mess.

Unmarried though having ‘an eye’ for the ladies, Kyngdon died from cancer on 11 April 1923.