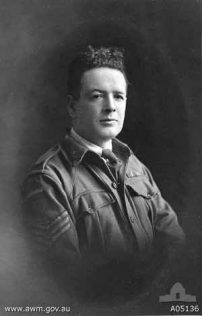 Described as one of those soldiers “who didn’t know fear”, Buckley was the first Australian recipient of the Victoria Cross to pass away upon returning to Australia after the Great War. Born at Upper Hawthorn, Melbourne on 13 April 1891 the son of Timothy Buckley and Honora née Sexton he was educated at Christian Brothers’ School in Abbotsford.

Enlisting at Warrnambool, Victoria on 18 December 1914 with the 13th Light Horse Regiment he soon found himself discharged in September the following year; in May 1916 he again enlisted as ‘Gerald Sexton’ using his brother’s first name and his mother’s maiden name. Attached to the 13th Battalion, by early 1917 Buckley was with the unit in France and fought at Bullecourt, Polygon Wood and Passchendaele during the Third Battle of Ypres, and in the darkest hours of the Allied cause in 1918, at Villers-Brettoneux and Hebuterne. Promoted to lance-sergeant, Buckley later fought in the Battle of Hamel, one of Australia’s finest hours and the brain child of Lieut-General John Monash (q.v.). He was later wounded on 6 July but returned to take place in the Battle of August the 8th when the 4th Brigade was involved in the difficult second stage on the left flank. It was during this operation while advancing on Morcourt that Buckley was awarded the DCM; on four separate occasions his company was suddenly confronted by enemy machine-gun fire and Buckley personally dealt with each incident. Promoted to Sergeant in late August 1918, he was again involved in the thick of battle during the advance on the formidable Hindenburg Line. On 18 September, at Le Verguier north-west of St. Quentin, attacking behind a creeping barrage, his unit came across a number of stubborn machine-gun posts. With his Lewis gun, Buckley cleared two posts firing from his trademark hip position. With total disregard to his personal safety, Buckley was as his citation said;

“to the fore dealing with enemy machine-guns, rushing enemy posts, and performing great feats of bravery and endurance without faltering or for a moment taking cover”.

In all he captured over 30 prisoners.

“A modest, unassuming young man, with a great fondness for horses”, Buckley died as a result of his fearless nature in a horse riding accident at Boolarra in Gippsland where he was working as a road contractor. Ten Victoria Cross winners were pallbearers at his funeral, including Albert Jacka VC (St. Kilda Cemetery), Robert Grieve VC (Springvale Botanical Cemetery), George Ingram VC (Frankston Cemetery) and Walter Peeler VC (q.v.).

(Image courtesy of the Australian War Memorial, A05136)