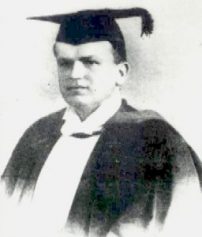 Born in Hannover, Germany on 27 October 1863 the eldest son of a Lutheran minister; in 1880 he migrated to South Africa to avoid service in the Prussian military and was associated with a number of schools notably Dale College where he was vice-principal (1885-90) before graduating at the University of Cape Town (BA, 1885). In 1890 he migrated to Victoria and worked for a period as a labourer at Bendigo until his papers arrived allowing him to teach locally at St. Andrew’s and Girton and later Newnham and Wesley Colleges in Melbourne from 1893.

Krome’s first big break came in 1894 when in partnership with Thomas Palmer (1858-1927) he opened University High School, a private co-educational secondary college and boarding school which soon acquired a reputation for academic excellence to rival that of John O’Hara’s (q.v.) South Melbourne College. When Palmer was later appointed headmaster of Wesley College in 1897, Krome became co-principal with his close friend Lawrence Adamson (1860-1932) who Palmer had dismissed at Wesley; Adamson later returned to the school in 1901 and Krome became sole principal (1902-06).

In 1904, while secretary of the Schools’ Association of Victoria, Krome was instrumental along with Palmer and Adamson in founding the (Incorporated) Association of Secondary Teachers of Victoria that led to the passing of the Registration of Teachers and Schools Act (1905) and the establishment of a registration board and remained an active council-member until his death; along with George Crowther (q.v.) he opposed Frank Tate’s (Box Hill Cemetery) ‘state socialist’ agenda of establishing state secondary schools. Succeeding JR Corr as headmaster at Methodist Ladies’ College (1906-17), he served under the influential Rev William Fitchett (Boroondara Cemetery) heralding a period of outstanding academic achievement with a strong school spirit; he introduced the Prefect system (1906); school uniforms (1912), and a sports club. Described as “tall, plump, chubby-faced, good humoured, hospitable”, Krome was naturalised in 1894 and even though a British loyalist as a senior Freemason, he suffered greatly from anti-German sentiment during the First World War which hastened his death.

Though strongly defended by Fitchett and the school council, he was forced to take six months extended leave due to ill-health, but died a day before the second conscription referendum on 19 December 1917 aged 54; a school house and memorial gate at MLC are named in his honour.