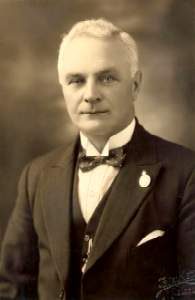 Born at Lauraville (Gaffney’s Creek), Victoria on 15 June 1878 the son of Timothy Jones a storekeeper who migrated from Ireland around 1865 and Maria née O’Keefe (d 1938); Jones was educated at the local state school and at John O’Hara’s (q.v.) revered South Melbourne College where he matriculated in 1891.

After working at the A.1 Consolidated mine in his home town for seven years, he was awarded a scholarship to study teaching at the Melbourne University (MA, Dip.Ed.) and later spent a number of years as a school teacher. Prior to enlisting in the Great War in June 1916 as a lieutenant with the 1st Australian Tunnelling Company, Jones was a superintendent of Physical Training with the permanent forces. Gassed in April 1917, after recuperating he was transferred to various training positions in England, notably as a bayonet fighting instructor from October 1917.

After the war, Jones’ interests were varied: on the board of management of the Australian War Memorial (1930-46); secretary of the Australian Tobacco Growers’ Association (1931-38); as well as holding mining interests as director of the A.1 mine (1942-68). But it was as a politician that Jones is best remembered. He was known as the “accidental member for Indi” (1928-31) when the sitting Country Party member for the Federal Parliament seat, Robert Cook, forgot to nominate for the 1928 election; he later served in the Victorian Legislative Council seats of Melbourne (1938-40) and Doutta Galla (1940-58) until his retirement in 1958. A constituent once described Jones as “the sort of man I would love to have as a neighbour, but he is too honest to be a politician”. As a Catholic member of the Labor Party, Jones joined the break-away Australian Labor Party (Anti-Communist) group – later renamed the Democratic Labor Party – after the infamous split in April 1955; two years earlier, he was a pall-bearer at John Wren’s (Boroondara Cemetery) funeral.

A life-long bachelor, he resided at 76 Grosvenor Road, East St. Kilda where he died on 27 December 1972 at the age of 94. Jones’ brother was Timothy George Jones (1886-1958) who married Louisa née Nathan, daughter of Benjamin Nathan (q.v.), owner of Rippon Lea.

(Image reproduced by permission of the National Library of Australia, nla.pic-an24282640)