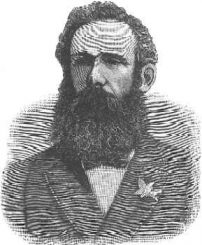 A native of Launceston, Tasmania, Oakden was the second of six children to Philip Oakden (1784-1851) a notable merchant and financier who floated in London the “Union Bank of Australia Ltd” and Georginia née Cowie; educated at Horton College before serving his articles under the noted ecclesiastical architect Henry Hunter (1832-92), he then went to London to further his apprenticeship under Sir Matthew Wyatt. Over the next 48 years until his retirement in 1916 from ill-health, Oakden distinguished himself as one of the finest architects and at the time of his death the oldest and best known. In 1868 he migrated to Victoria and practised architecture in Ballarat (1868-74); among the many buildings he is credited with designing include St. John’s Presbyterian Church (1871) and the Clunes Town Hall (1872).

In Melbourne, Oakden joined Leonard Terry (Melbourne General Cemetery) as a junior partner on 1 January 1874 bringing to firm of “Terry & Oakden” (1874-85) a number of church and school commissions and was responsible for the design of the North Fitzroy Methodist Church (1874); the Wilson Street, Brighton state school (1875); “Allan & Co” building, Collins Street (1876); Church of England Girls’ Grammar in South Yarra (1884); and the landmark Working Men’s College (1883-87) a fine example of the Victorian Free Gothic Revival style.

With new partners G Addison (1885) and Henry Kemp (1886), “Oakden, Addison & Kemp” (1887-95) went on to design the Queen’s Coffee Place, Rathdowne Street Carlton (1887) (“a free treatment of the German renaissance”; Melbourne University’s Queen and Trinity Colleges (1887); the North Fitzroy ANZ Bank (1889) in Federation Queen Anne style; the tallest building in Melbourne in the form of Australian Building in Elizabeth Street (1889); and in co-junction with Lloyd Tayler (q.v.), the New Zealand Insurance Building (1888), with its series of arches in different numbers and its thin decorative stucco mouldings.

The financial depression of the 1890s was a difficult period for the architectural industry in general and Oakden was one to suffer. With limited work, the firm dissolved when Kemp moved interstate in 1895; until 1900 he worked privately until another partnership was formed with Cedric Ballantyne (“Oakden & Ballantyne”). The firm was responsible for introducing the Pasadena style of Californian Bungalow to Melbourne, the first built being in Toorak Road, Toorak (1911). For many years, Oakden advanced the standing of architects through his election as a fellow and councillor of the Royal Victorian Institute of Architects (1890-1916) and president (1892-93, 1896-97, 1901); his direction and well-balanced judgement was acknowledged by his peers at the time of his death as instrumental in laying the foundation of the society.

A noted Freemason and a past Deputy Grand Master of the Grand Lodge, he resided at Ambleside – Hampton Street, Brighton where he died on 25 November 1917 from a heart attack.

(Image reproduced from Sutherland, A., “Victoria and its Metropolis” (1888).)