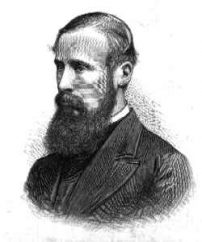 Acknowledged as one of the most controversial clergyman in the history of the Victorian Presbyterian Church, Strong was born at Dailly, Ayrshire, Scotland on 26 September 1844 the son of Rev David Strong and Margaret née Roxburgh. While attending University of Glasgow (Hon LL.D., 1887) between 1859 and 1864 he came under the influence of Edward Caird, professor of moral philosophy and rejected the scholastic Calvinist teaching as the true and sufficient expression of the evangelical faith, instead following a more liberal theological view. Ordained in 1868, his success as a “pastor, preacher, liberal theological teacher and social reformer” led to his appointment as head of Scots Church, Collins Street (1875-83) in Melbourne. Yet, “almost from the hour of his arrival”, controversy was never far away and his essays, outspoken criticism of social evils and advocacy of evangelical reform soon led to friction within the presbytery; Strong offered his resignation in August 1881 but instead agreed to take leave and he left to visit Scotland in 1882.

But his absence did little to resolve the theological divide and soon after his return he became embroiled in fresh controversy over his failure to denounce George Higinbotham’s (q.v.) lecture he chaired titled “The Relation between Science and Religion” and was threatened with a libel for heresy; in a tense and dramatic sequence of events he refused to attend the General Assembly on 14 November 1883 arguing the action against him as “unconstitutional and illegal” according to the laws of the Church and defiantly set sail for Scotland the next day. In November 1884, Strong returned to Melbourne and the following year founded the Australian Church – a free religious fellowship – yet it was his controversial views that led to its eventual demise in 1957. Among the many admirers of Strong were the politician Sir James Lorimer (St. Kilda Cemetery), Alfred Felton (St. Kilda Cemetery) of “Felton, Grimwade & Co”, and Alfred Deakin (St. Kilda Cemetery), thrice Prime Minister of Australia.

Residing at 7 Barnalo Grove, Armadale he died while holidaying at Lorne on 12 February 1942.