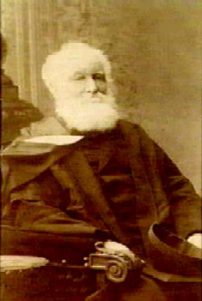 Remembered as one of the pioneers of education in Victoria, Budd was a native of Kensington, London before migrating to the colony in 1840 having attained a BA (1838) from St. John’s College, Cambridge. After an unsuccessful stint in partnership with brothers Frederick and Robert Pohlman (Melbourne General Cemetery) on a sheep station at Kyneton, he turned to private tutoring. In 1846 Budd founded a classical school in Victoria Parade, but two years later became founding headmaster of the Diocesan Grammar School (East Melbourne) – “the first public school in Victoria” and precursor to Church of England Boys’ Grammar (1858); his son, Henry (c1844-1905) was part of the first intake of students.

Appointed an Inspector under the Denominational Schools Board (1854-73), he was charged with the role of examining and classifying teachers. With the Common Schools Act (1862), Budd served as Inspector-General, but from the outset, the Common Schools Board was unable to achieve the aim of coordinating education in Victoria under a single board. It took until the passing of the Education Act (1872) that free and secular state education under ministerial control that we know of today was introduced. Budd had little sympathy for the new order and resigned in 1873. He went on to open a classical school for girls in Brighton, where he spent his final years.

Budd died at his home Rooding – 3 Rooding Street, Brighton having outlived three sons and a grandchild. Among the pupils that were under Budd’s guidance, were the Chomley brothers Judge Arthur and Police Commissioner Hussey (St. Kilda Cemetery).