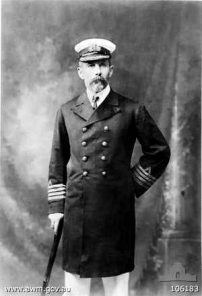 No history of Australia’s naval defence would be complete without the role played by one man who figured so prominently, that of the ‘Father of the Royal Australian Navy’ – Sir William Rooke Creswell.

Born in Gibraltar in 1852 where it was said the “sight of oaken bulwarks” of the British fleet seduced him to enter the Royal Navy as a cadet in December 1865; at Laroot River, Penang in 1873 while on the gunboard Midge he performed gallantly against Chinese pirates and suffered a severe wound. In September 1878 with the lack of promotion and with his health having been affected by fever, he retired with the rank of lieutenant and migrated to Australia. Efforts as a pastoralist in Queensland and Northern Territory went without much success in spite of Creswell’s determination to succeed.

In 1885 he moved to South Australia and when the lure of the sea became too great he was appointed first-lieutenant of HMCS Protector in October of that year. The following year marked the beginning of a silent but influential campaign to increase the size and deployment of Australia’s inadequate naval defence force instead of subsidising the support of the British squadron; not until Federation could the idea of an Australian Navy be realised. Creswell was appointed commandant of the Queensland Naval Forces in May 1900, but returned to command his old ship Protector in the Boxer Rebellion from August 1900 to January 1901, an event that was, as The Herald described, “the first time a colonial ship of war had ever been despatched on Imperial service”. Upon his return, he was later appointed naval adviser to the Minister for Defence enabling Creswell a direct avenue to advocate the establishment of an Australian Navy and it was said that “his knowledge of the limits of political possibilities was unrivalled”.

It wasn’t until 1909 at the Imperial Defence Conference that a firm course of action was adopted; by October 1913, Australia had a commanding fleet consisting of the battle cruiser HMAS Australia, the light cruisers Melbourne, Sydney and Encounter, the River-Class destroyers Parramatta, Yarra and Warrego, and two E-Class submarines AE.1 and AE.2. HMAS Brisbane later joined the fleet in September 1915 replacing Encounter. In 1911, Creswell was knighted and appointed Chief of Naval Staff continuing in the role until his retirement in 1919 and oversaw the administration of the navy during WWI.

Promoted to vice-admiral in 1922, he died on 20 April 1933 aged 80 after a prolonged illness and was accorded a state funeral.