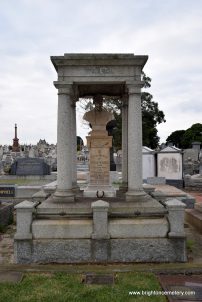 This story began on Anzac Day 2004 when my husband, David and I joined a tour at the Brighton Cemetery. As we passed a most impressive monument built over three gravesites, a friend casually mentioned that there were no bodies interred there. The possibility that there were no bodies under such a large, impressive memorial stirred my curiosity, and so my research began into the Mysterious Weigels. Inscribed on the memorial is:

A search of the burial register confirmed that no bodies nor any cremated ashes were buried in the graves, Presbyterian Section “L”, Grave numbers 9, 10 and 11 (Pres*L*9-11). A visit to the manager of the Brighton Cemetery did not shed any light on the matter. He was as mystified as we were. He had noticed in the records that bodies had not been buried in the graves and, at first, thought that he may be able to sell the sites, however, on inspection saw a large memorial erected over the three gravesites. It later came to light that after Oscar’s death, Johanna wrote to the Cemetery Trust requesting “to have 3 graves on the front row (main drive) Nos 9, 10 & 11 in place of Nos 50 to 52 Compt L Presbyterian portion (second row) owing to the position being more desirable for the monuments she intends erecting”. This was approved at the Trustee meeting held on 12 November 1917. A search of the Birth, Death and Marriage records revealed the death of Johanna, but there was no record relating to the death of Oscar. The mystery deepened. Where was Oscar when he died? The time had come to proceed in a logical and systematic manner.

The Search for Oscar

Oscar and Johanna Weigel’s probate papers were obtained from the Public Record Office in Victoria. These documents provided many invaluable pieces of information, but not the crucial reference to Oscar’s whereabouts at the time of his death. The papers revealed that Oscar was a paper pattern manufacturer and resided at Rosen-Aue – (34) Queen’s Road, Albert Park which he purchased in 1883 the same year he also bought from George Pontin a hotel-schoolroom at 229 Lennox Street, Richmond which they altered into a factory. The probate papers listed Oscar’s “half share in the assets of the business of Cut Paper Patterns and Publishers carried on by deceased and his wife under the firm name of ‘Madame Weigel’.” Oscar’s estate was sworn for probate at £32,700, while Johanna left an estate valued at more than £71,800 in 1940. When Oscar and Johanna Weigel arrived in Melbourne on the ship Mysore in March 1877, they were on their honeymoon and only intended to stay in Australia for six months. Even though they travelled extensively overseas, they made Victoria their home for the duration of their lives. The Letters of Naturalisation documents record Oscar Weigel, whose occupation was ‘Engineer’, was born in Brunswick, Germany. Oscar became a naturalised Australian citizen on 7 March 1893. Desirous of obtaining some copies of “Madame Weigel’s Journal of Fashion”, I placed an advertisement in the “The Trading Post” newspaper. One person responded and informed me that a friend was familiar with the Weigel’s 27-acre property at Mount Macedon, which Oscar purchased in 1890. Oscar and Johanna Weigel built a two storied residence with 26 rooms and named it Drusilla. The “Woodend Star” on 6 June 1903 reported the destruction of the residence in a house fire which consumed the entire contents with the exception of a piano. The property was later sold to a Mr A Murray who built another house on the site. In 1919, the property was bought by (Edward) Norton Grimwade (q.v.) who demolished the existing house and built a new, large brick residence there. One of the photocopies provided by the Gisborne & Mount Macedon Districts Historical Society was an article printed in “Madam Weigel’s Journal of Fashion” on 1 February 1940:

“An inveterate traveller, Madame Weigel spent much of her time voyaging round the world, and it was on one of these trips, in February 1915, that her husband passed away in Los Angeles”.

At last, an explanation as to why Oscar Weigel’s body is not interred in the grave at the Brighton General Cemetery. An internet search resulted in the printing off of the appropriate application form to obtain Oscar’s death certificate from the United States of America. There was great excitement when it arrived seven weeks later. Many more facts were gleaned from the certificate about the life and death of Oscar Weigel. His occupation was described as ‘Retired Publisher’ and his father’s name was Louis Weigel. His place of residence and death was 2062 West 6th Street, City of Los Angeles, where he had resided for three months. The cause of death was acute uraemia and chronic nephritis, secondary. One of the most important pieces of information on the certificate is under the heading of “Place of Burial or Removal” – Cremation Rosedale Feb. 9 1915. Most likely, Johanna Weigel would have brought Oscar’s ashes back to Australia where they could have been interred when his tombstone was erected some time after November 1917.

The Death Certificate of Johanna Wilhelmine Weigel records some details relating to her life story. The names of her parents and her maiden name were recorded as “unknown” which is not surprising as the Weigel’s guarded their privacy closely and after her death, these details were unlikely to have been known by even her close intimates. She married Oscar in New York when she was 29 years of age. Johanna died aged 92 years from heart failure – 28 days and myocardial degeneration – 10 years. The place of death and usual residence were recorded as (The Oriental Hotel) 41 Collins Street, Melbourne. On 11 January 1940, her body was cremated at Springvale Botanical Cemetery where the records reveal that her remains were collected. Nothing is known of who collected the remains, or what became of them. A search of the German records for Johanna’s maiden name of Astmann (obtained from Oscar Weigel’s probate papers), revealed that she was born at Bromberg Stadt, Posen, Prussia (Poland) on 11 February 1847, the second of five children born to August Astmann and Emilie née Sachs. On 8 August 1872, Johanna sailed on the ship Hamburg for New York and in the ensuing years, is believed to have found work as a designer with McCall’s Fashion House, a leading paper pattern establishment where she was “regarded as a most expert fashioner and cutter”. A generous benefactor to various charities, Johanna was also a feminist who once said that “if a girl has another talent than cooking, I see no reason why she should not develop it in preference to house and kitchen work, which can be learned when necessary”.

An Interesting Romance of Industry

The “Madame Weigel’s Journal of Fashion” dated 1 February 1943 records on the front cover that the business was established 65 years ago – within a year after their arrival in Melbourne in 1877. Some three years later circa 1880, they produced the first fashion journal printed in Australia which was originally known as “Weigel’s Journal of Fashions” and later, circa 1900, as “Weigel’s Journal of Fashion”. Describing the beginning of the pattern industry, she once said, “Women asked me to show them how to make dresses like mine, and in a moment of weakness I cut some patterns for them”. A small shop was opened in the Eastern Arcade, Melbourne selling paper patterns for women’s dresses before demand exceeded supply and the business moved to 99 Swanston Street. Some time after 1883, the business was carried out at the Lennox Street, Richmond site where it continued until well after Johanna’s death, eventually moving to 12 Levanswell Road, Moorabbin. The role played by Oscar Weigel in the business activities should not be underestimated. Oscar was an engineer, undoubtedly with drawing skills, and it is known that he did the drawings to illustrate the various styles of frocks. Johanna, formerly employed by McCalls in New York, would have been privy to the cutting-edge technology of fashion design and the manufacture of paper patterns, skills which were crucial to the success of their paper dress pattern business. It is abundantly clear from research completed to date that Oscar and Johanna Weigel developed a thriving fashion and clothing pattern industry which played a major role in the history of Australia, New Zealand and countries further afield. Not only did they bring to Australia the latest fashion and clothing designs from London, Paris and New York, but they made it possible for those with only modest sewing skills to make their own fashionable clothing. They revolutionised the appearance of people, women and children in particular, because rich and poor alike could purchase reasonably priced paper patterns, buy a bolt of cloth according to their budget, and make attractive garments at affordable prices. The women in country towns availed themselves of Madame Weigel’s patterns and made clothes that were of the latest styles. They were no longer the poorly dressed and unfashionable “country cousins”. The contribution made by the Weigels to the development of the fashion and clothing industry, assures them of a permanent place in the history of Australia, for it was they who kept the Australian citizens abreast of the “best dressed” in Europe and America.

The Oscar and Johanna Weigel Memorial

The bust of Oscar Weigel, which is mounted on top of a pedestal on the Weigel memorial was sculpted by Margaret Baskerville (1861-1930), who was described as “Victoria’s first professional woman sculptor”. She was also commissioned to execute a memorial to Sir Thomas Bent (q.v.), the Brighton politician and Premier of Victoria from 1904 to 1909. The book “Victorian Artists” (1988) by Margaret Rose refers to the bust of Oscar Weigel as follows:

“Like CD Richardson, Margaret Baskerville was also to be kept busy with commissions both during and after World War I. While some of these were to relate to the end of the war, others were of private citizens and included a portrait bust of Oscar Wiegell (sic)…”

“I DESIRE that my body be cremated AND I ALSO DIRECT that the bust of my late husband in my possession be placed above his tombstone in the Brighton Cemetery and covered in a suitable manner at such cost as my Trustee in its discretion shall think fit and that a sum not exceeding Five hundred pounds be retained out of my residuary estate and expended to keep that burial ground in the said Cemetery and the erections and surroundings in a proper condition and state of repair during the twenty-one years ensuing my decease”.

That clause suggests that the Weigel memorial was built in two stages many years apart. A study of the photograph of the Weigel memorial reveals that four solid stone columns support a large stone canopy, under which is a pedestal, on top of which is the bust of Oscar Weigel. The question remains, did Johanna Weigel leave instructions that her cremated remains should be collected from Springvale Botanical Cemetery and placed under the ledger on top of Oscar’s tombstone, before the columns, canopy and pedestal were erected? It is conceivable that her cremated remains were placed in the original base structure, before phase two of the building of the memorial took place. If this is so, her name should appear on the burial register, but it does not!