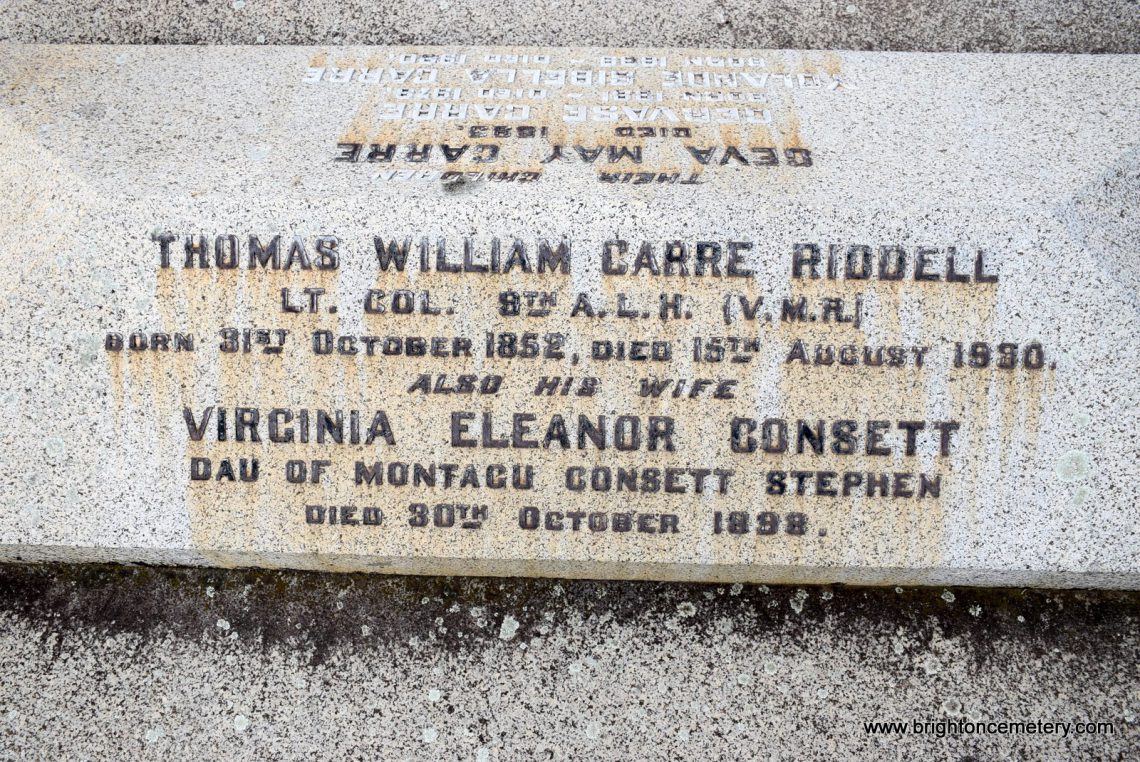 Born on 31 October 1852 the eldest son of pastoralist and politician John Carre Riddell (Gisborne Cemetery) and Marianne née Stephen; in 1879 he assumed the additional name of “Carre-Riddell”. Educated at Melbourne Church of England (Boys’) Grammar School (1865-73) where he excelled in cricket (1869-73, captain 1869), football, athletics and rowing he also won a prize in Matric (1873); in later years Carre-Riddell served on the School Council (1911-16, 1919-22) and Old Melburnians (1903-25). He went on to study at Melbourne University (member Melb Uni Blue cricket team) but took up pastoral pursuits at Macedon, Victoria. Aide-de-camp to three successive Victorian Governors (1902-12), Carre-Riddell was in charge of the military escort during the opening of the first Federal Parliament in 1901 by the Duke of Cornwall and York (later King George V). He was placed on the retired list in 1912 with the rank of lieutenant-colonel in command of the 9th Light Horse and awarded VD for long service; previously he served under Colonel Tom Price (Melbourne General Cemetery) who during the great maritime strike of 1890 ordered his men to “fire low and lay the disturbers of law and order out”.

Riddell died on 15 August 1930 just five months after the death of his younger brother Walter Riddell (Gisborne Cemetery) who had a varied career notably his twenty year term as chairman of the Board of Works; amongst the mourners at Carre-Riddell’s funeral conducted by “WG Apps & Sons” were fellow member of the The Bohemian’s club William Moule (q.v.), Frederick Hughes (St. Kilda Cemetery) and Robert Blackwood (Melbourne General Cemetery). Residing at 39 Armadale Road, Armadale, on 23 February 1886 he married his cousin Virginia née Stephen (d 1898) and they had two sons and three daughters (Geva d 1893; Gervase d 1978; Yolande d 1980).