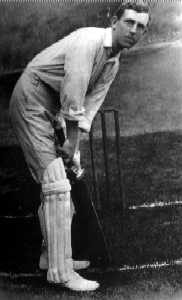 Vernon Ransford who later contemporaries described as “a Neil Harvey who came 40 years earlier…a man with an impatient streak of brilliance, one who could let loose in a gale of run-getting”, was born at 25 Nicholson Street, South Yarra on 20 March 1885 the son of Henry Ransford, clerk and Lydia née Blazey; he was educated at Yarra Park School and later Hawthorn College.

At eighteen years of age, he was good enough to be selected for Victoria (1904-26) in a first-class record that yielded 8,268 runs at 42.4 and 25 centuries before his retirement from ill-health and the effect of injuries. He made one of the better debuts for Australia during the 1907-08 tour of the visiting English side (won by Australia 4-1) playing in each test with an average of 28.8. Against a strong New South Wales team in Sydney the same year, he became the first Victorian to make a century in each innings of any first class match – 182 and 110.

It was enough to see Ransford tour England for the first time in 1909 during one of the wettest English summers – he was behind only the legendary Warren Bardsley (1882-1954) in first-class aggregates, but topped the Test averages with 353 runs at 58.83 scoring 143 not out at Lord’s; in a series won by Australia (2-1, 2 drawn), Ransford excelled himself as a strong leg-side batsmen with a brilliant cover-drive and a rather attractive crouched batting stance that proved deceptive to bowlers who took it Ransford was about to take a nap.

Ransford last played for Australia in the 1911-12 English tour of Australia (won by England 4-1) making 252 runs at 25.2. Selected for the following 1912 tour of England, Ransford along with Clem Hill (North Road Cemetery), Warwick Armstrong (Waverley Cemetery), Victor Trumper (Waverley Cemetery), Hanson Carter, and Albert Cotter (1883-1917) withdrew in protest of the replacement of the respected Frank Laver (q.v.) as player-manager and never played for Australia again even though just 26 years old; his record stood at 1,211 runs at 37.84, 1-100s and 7-50s, 10 catches and 1 wicket for 28.