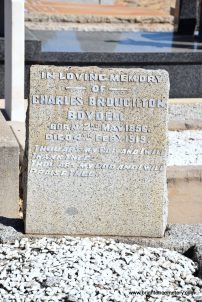 Born in New South Wales on 2 May 1856 the son of William Boydell and grandson of Bishop William Grant Broughton (1788-1853), Australia’s first Anglican Bishop and founder of King’s College (Parramatta) – the oldest educational institution in Australia.  Educated at the College, Boydell went on to join the staff of the New South Wales Parliament. On the inception of Federation he transferred to the Commonwealth Parliament and was appointed clerk assistant of the House of Representatives; he went on become Clerk of House Representatives (1907-08) and Senate (1908-17) “enjoying the respect and esteem both of the members of the Federal Parliament and of his subordinates”.

Residing at Oakfield – Pasley Street, South Yarra, ill health forced his retirement and he died from heart disease on 4 February 1919 aged 62. On 29 December 1880 he married Madeline née Arnold, they had four sons.