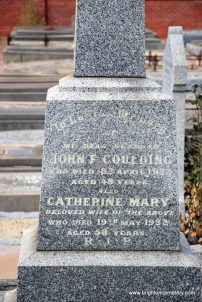 Described as “one of the leading Melbourne grain and produce merchants”, Goulding was born at Ballarat, Victoria. In 1895 he helped establish the firm “Ryan, Goulding & Co” and later began business on his own account. In 1921 he was President of the Melbourne Corn Exchange.

Goulding died from heart disease on 18 April 1922 survived by his wife Catherine (d 1932) whom they had five daughters and three sons; his funeral was largely attended “represented by most shipping, insurance and grain firms in the city”. The family resided at Wathara – Toorak Road, Toorak.