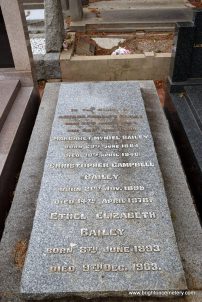 Born at Ballarat West, Victoria on 21 August 1863 the son of Christopher Bailey and Ellen née Jones and educated locally where his talents led to a stint as a commercial photographer; he won a medal at the Colonial and Indian Exhibition, London (1886). In 1890 Bailey decided to enter the Victorian College of Pharmacy and after graduating, commenced business four years later at 175 Glenferrie Road, Malvern.

He became a leading member of the pharmacy trade working tirelessly to improve the professional standing of the industry and served as a council member of the Pharmaceutical Society of Victoria (1901-37) and later with the Pharmacy Board of Victoria (1912-37); he was President of both bodies numerous times. One contemporary described Bailey as “a dapper figure, with a waxed and pointed moustache and a buttonhole flower”, his expertise allowed his representation at many conferences and was a driving force behind the Pure Foods Act. For many years, Bailey served as a magistrate on the Malvern bench and was a noted Freemason, Rotarian and member of the Australian Natives’ Association.

Residing at 1 Sorrett Avenue, Malvern, he died on 25 April 1938 aged 74 survived by his wife Margaret née Tough whom he married in 1895; three sons became pharmacists.