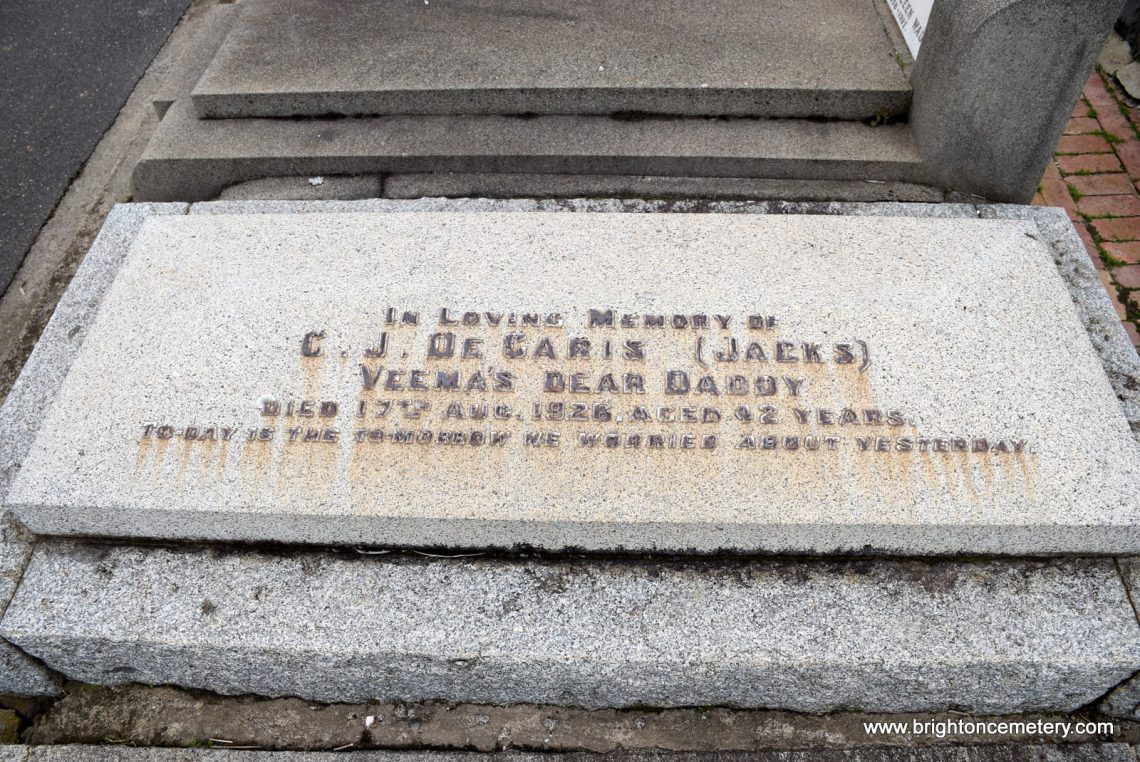 The son of Elisha de Garis (q.v.) and Elizabeth née Buncle, de Garis was born on 22 November 1884 at North Melbourne. Described as “a weed…sickly in appearance, of stunted growth…with the impression of retiring modesty and bashfulness that was almost girlish”, de Garis was an above-average student at Mildura State School; by the age of nine he had obtained his exemption certificate which later enabled him to leave school and assist his father’s auctioneer, real estate, dried-fruits brokerage and finance business at Mildura. In the challenging role of rent-collector he was successful as he was unconventional and people soon endeared to his irresistible boyish qualities found it difficult to refuse payment; he also developed a knack of solving troublesome problems that earned him the role of town conjurer.

But his general knowledge was limited, and on his father’s urgings he attended Wesley College in Melbourne (1899-1901) as a boarder (nicknamed ‘Soowy’); after a difficult induction he rose from last to dux of his class, became somewhat of a legend with his affectionate smile, and excelled in sports notably cricket and football (“easily the smallest boy who had ever played in Public School football”) where his lack of height (4 feet 11 inches) and weight (6 stone 11 pounds) confounded both his coaches and the opposition earning him taunts from rival schools (Scotch College – “Swat that fly!”). On his return to Mildura after matriculating, he steadily took over the running of the business and by the age of twenty-one was in sole charge.

His lucid grasp of business fundamentals, compelling magnetic personality, endless ideas, restless activity and supreme confidence achieved much in a remarkable twenty year period between 1905 and 1925 but ultimately ended in personal failure so much so that on 5 January 1925 he faked his death creating a public sensation that led to an eight day Australia wide search; a year later he committed suicide on 17 August 1926 with debts of £420,000. As an entrepreneur, de Garis’ mistake was his supreme egotism and confidence in his ability to carry through any crisis that may eventuate. In 1910 he managed to not only overturn a directive from the bank to reduce the firm’s £6,000 overdraft but had it increased to £15,000 to enable the establishment of a modern packing-shed (“Sarina Packing Pty Ltd”) a venture that earned him the gratitude of many a grower in the dried-fruits industry. He went on to purchase the 10,009 acre Pyap Village Estate river property in South Australia in 1913 for £23,000; described as “the apple of de Garis’ eye…a panorama of productive beauty” it was later valued at £100,000 only to be sold on 3 November 1921 by the bank to recoup £23,000 in securities owed. In 1921 at the zenith of his career, de Garis was said to have been earning £500,000 a year, but after an extraordinary change of misfortune he was bankrupt by April 1923 largely through his ill-fated closer-settlement scheme at Kendenup, Western Australia (47,325 acres) bought for £45,000 “on too insecure a base for safety” but not before a promising deal with American oil-financers fell through. Deceitful and grubby politics in Western Australia also hastened his downfall.

He later spent a strenuous two years amassing capital to finance his real estate investment company “Melbourne Subdivision Company” which at one stage held some 5,000 acres of undeveloped land mainly along the Mornington Peninsula. For all his failings, de Garis was one of the first to embrace modern day marketing as director of publicity for the Dried Fruits Association in 1919. His jingle – “I fear no more the dreaded flu, for Sunraysed fruits will pull me through” – was a resounding success and was credited with increasing sales in Australia by 5,000 tonnes at a time when the lack of shipping space threatened the whole industry that relied on exports to Great Britain. A pioneering airmen who broke a number of records, he went on to write an autobiographical novel “The Victories of Failure. A Business Romance” (1925).

“Today we are laying to rest the body of no ordinary man. I will alter that, and say he was a most extraordinary man, a man with brains, wonderful vision, courage and business ability. But behind it all he was a kindly and good man”.

In September 1907 he married Rene née Corbould; they divorced in May 1923 and the following month he married his former private secretary Violet née Austin.