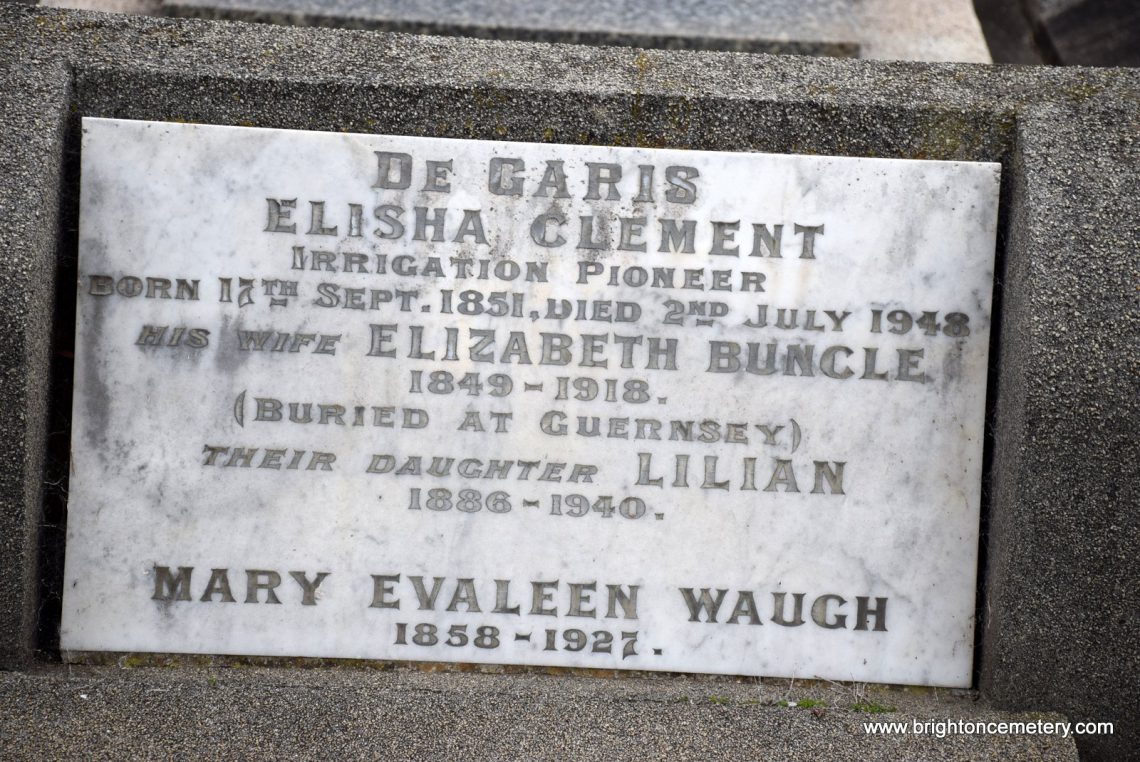 Born at St. Martin, Guernsey, Channel Islands of Norman French descent, the family migrated to Adelaide in 1854 where de Garis received his education. After training as an architect in Melbourne he joined the Wesleyan Methodist church and was ordained in 1876 serving in Charlton, Durnham Ox and Kerang in country Victoria.

It was while a Methodist minister that de Garis became interested in irrigation to assist farmers of north Victoria during the drought-stricken period of 1877-84; he soon emerged as a “formidable yet disinterested leader” of the water conservation schemes advocated by Hugh McColl (1819-1885) and personally lobbied Alfred Deakin (St. Kilda Cemetery) to provide financial assistance to the irrigation concept being advanced by the Chaffey brothers in 1887. By now de Garis had left the Methodist ministry but was still a lay preacher until his death. He settled in the infant town of Mildura (1891-1908) where he established a diverse range of successful ventures and entered local politics serving on the Shire Council (president 1907-08); he lobbied for the Melbourne-Mildura railway line and was first President of the Mildura Hospital. Leaving his Mildura interests to his son CJ (Jack) (q.v.), de Garis moved to Melbourne in 1908, and settled on Beach Road Sandringham. The following year he gained election to the Moorabbin Shire Council (1909-12) to represent the local area; the following year he unsuccessfully attempted to win election to the state seat of Brighton after the death of Sir Thomas Bent (q.v).

De Garis died on 2 July 1948, aged 96 and spent his last years residing at 268 Latrobe Terrace, Geelong. Survived by three of his eight children, Mary (Clementina) de Garis (1881-1963) who in 1907 became the second women in Victoria to practice medicine after Emma Stone (Boroondara Cemetery).  Writing his autobiographical novel “Victories of Failure. A Business Romance” (1925), his son Jack described his father as;

“gifted with masculine graces and accomplishments…his intellect was extraordinary. His variety and depth of knowledge profound. His eloquence was unrivalled, and his diction surpassingly rich and diverse”.