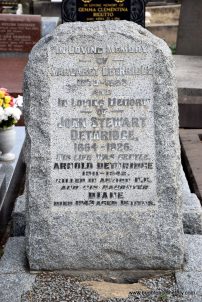 Dethridge was born on 25 June 1865 at South Yarra, Melbourne the son of James Dethridge, public servant and Mary née Kipling; his elder brother George (1863-1938) went on to become first chief judge of the Commonwealth Court of Conciliation and Arbitration.

Joining the Victorian Department of Public Works in 1888, five years later he began his lifelong association with the Water Supply Department (1893-1926) becoming “one of the State’s most distinguished public servants”. Passing his examinations in 1897 he was appointed engineer for the Goulburn River works (1903) responsible for the Nagambie Weir and Waranga Basin at Rushworth; it was here that Dethridge “developed his direct measuring water-meter for use in flood irrigation, a simple, robust and inexpensive device which he refused to patent” and became standard in Victoria and adopted overseas. Deputy chief engineer in 1908, further promotion came in 1911 when he was appointed to the State Rivers and Water Supply Commission during a period when Victoria’s water storage supply doubled. In February 1917 Dethridge represented Victoria on the River Murray Commission which saw the river regulated to a series of weirs; he designed those at Torumbarry near Echuca and Mildura which consist of “a row of steel trestles mounted on wheels so that they could be rolled completely out of the river in time of flood”.

An active member of the Institution of Civil Engineers (London) and a past president of the Victorian Institute of Engineers (1923-24), he died on 15 May 1926 at his home 9 New Street, Brighton Beach survived by his wife Margaret née Robinson whom he married in October 1895; amongst those who attended his private funeral were (Sir) Murray Bourchier (1881-1937), Minister for Agriculture, William Cattanach (Melbourne General Cemetery), chairman of the State Rivers and Water Supply Commission and William Calder (Cheltenham Pioneer Cemetery), chairman of the County Roads Board.