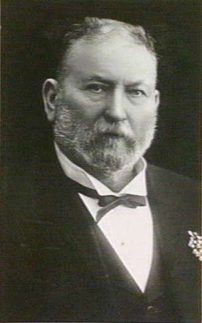 Undoubtedly one of the most colourful if not at times, controversial figures in Victorian history, Bent was born at Sir John Jamison’s (1776-1844) grand estate Regentville, Penrith, New South Wales on 7 December 1838 (“just five months after his parent’s marriage”), the son of a convicted house-breaker James Bent (q.v.) and his wife Maria née Toomey (d 1867); there are doubts whether James is the birth father (“he was not exactly warm and generous towards Thomas”). The family arrived in the Port Phillip district in 1849 and Thomas continued his education at St. Mark’s Anglican School, Fitzroy (“one of its first pupils”) which ended in 1851 when his father set up a market garden in East Bentleigh.

From the humble beginnings of a market gardener, Bent rose to become Premier (1904-09) on little more than a gifted tongue and an uncanny ability to sway an outcome. His cunning was evident early in his career as rate collector for the Moorabbin Road Board (1862-63) and later Brighton Borough (c1870-74) where he used the position to engineer three election victories; after his astonishing 1871 defeat of George Higinbotham (q.v.) by just fourteen votes, irregularities were found that “had nothing to do with human error” but Bent’s shrewd use of “his public position, the provisions of the relevant Acts and an awareness of human foibles to stack the electoral roles”. He served as a member of the Moorabbin (1863-65, 1865-1909) and Brighton City Councils (1874-1909) where he was able to wield control of both through the election of many family and business associates including his brothers Edmund and John, Macansh (q.v.), O’Shea (q.v.), Walstab, and Munro.

In state politics as member of the Legislative Assembly seat of Brighton (1871-94, 1900-09), Bent was a master of bluff, lobbying, logrolling and obstructive tactics; he served in many ministerial positions, including Railways (1881-83, 1902-03, 1904-09), Public Works (1903-04), Treasurer (1904-09) and was Speaker of the Legislative Assembly in 1892-94 before his defeat by William Moule (q.v.). Ebullient and efficacious, he was above all cunning in his ability to “use his political position for personal profit”; as Minister of Railways, he was able to influence the duplication of the Brighton line in 1882 thus increasing the value of his land holdings in the area. At one stage he was the largest land holder in the Brighton district and one of many ‘land boomers’ in the Victorian parliament. Bent was to an extent an enigma. “Bluff, but sensitive to criticism, public spirited but self seeking, ruthless but kind hearted, conservative yet egalitarian”; he possessed abundant spirit and zest.

Twice married (Elizabeth née Hall d 1861; Elizabeth née Huntley d 1903), Bent was knighted in 1908 and died on 17 September 1909 survived by his daughter Elizabeth Bleazby (q.v.) who went on to become one of the first women councillors in Victoria. The suburb of Bentleigh (East Brighton) was named in honour of Sir Thomas Bent in 1907.