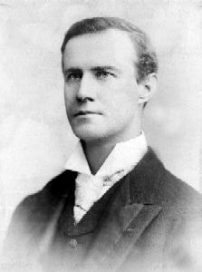 William Henry Moule who had a varied and distinguished career in politics, sport and law was born on 31 January 1858 the son of Frederick Moule (q.v.) and Julia née Man. Educated at Melbourne Boys’ Grammar School (1866-75) and later Melbourne University (LL.B., 1879) he was admitted to the Bar in 1879 and began practising the following year with “Vaughan, Moule and Seddon”; his most celebrated proceeding was known as the “Buckley will case” (1882). He was later called to the Bench as a County Court judge (1907-35) specialising in insolvency cases; The Age wrote of Moule as a judge that “he had a genial disposition, and though the hardened criminal had reason to fear his caustic comments with the sentence to follow, first offenders were treated with leniency and kindly advice”.

Described as a “fiery young advocate with strong political ambitions”, he sensationally defeated Thomas Bent (q.v.) (“Bent, not broken”) in the local seat of Brighton (1894-1900) 1,579 votes to 925 as a free-trader believing that the “commerce of the community has been strangled by protection” and later chaired royal commissions on law reform (1897) and factories and shops law (1900).

When Moule appeared in Brighton first,
The story to him went,
That he would but his boiler burst
In steaming against Bent.
The undertaker, they declared,
Could only Tommy fight;
But Moule took up the ball, prepared
To bowl instead of SLEIGHT
The figures up, a mighty laugh
The gladdened heavens rent,
And then they wrote Moule’s epitaph –
“THE MAN WHO PUT OUT BENT”.

In cricket Moule played nine first-class matches between 1879 and 1885 for Victoria including the first Victorian team to defeat a touring English side (Feb 1879). He went on to play for Australia with William Murdoch’s (1854-1911) touring side of 1880 in a team that included the legendary Frederick ‘Demon’ Spofforth (1853-1926); in the only test played at The Oval (Sep 1880) won by the England he took three wickets for 23 runs and with the bat put on a last wicket stand of 88 with Murdoch scoring 34 runs. At the time of his death he was the last surviving member of that team.

In April 1935 Moule retired from the Bench due to ill-health (“having had the largest term of any County Court judge”) and died on 24 August 1939 survived by his wife Jessie née Osborne (1864-1958; Brighton Cemetery) whom he married in 1885; a son (Humphrey) Osborne Moule (4th Australian Light Horse) was killed at Lone Pine on 6 August 1915. He resided at Clarence House – 83 Queens Road, St. Kilda. In 1876 while at University, Moule joined the exclusive The Bohemian’s club (1875-1931) becoming the longest serving member at its dissolution on 31 December 1931; with the motto “obsolescent and inelegant” cricket was the main test of qualification (Rule 7 – “the entrance fee be nil and that the subscription do not exceed the entrance fee”).