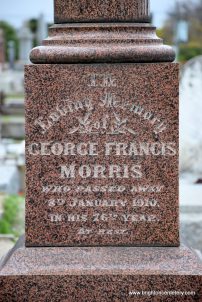 A native of Warrington, Lancashire, England, Morris was born in 1834 the son of William Morris and Emma née Francis. The lure of gold led Morris to migrate to Victoria in September 1852 where he was moderately successful on the Ovens River goldfields; he later moved to the Buckland diggings establishing a general store before settling in at Newtown (Beechworth) as a general merchant where he was successful. After disposing of his business in 1858 he travelled to Europe returning the following year to purchase 220 acres near Wahgunyah and Rutherglen and overtime became the largest land owner in the district (2,000 acres) and a noted pioneer of farm mechanisation. Attracted to growing vines, in 1860 he purchased land at Brown’s Plain near Rutherglen and established Fairfield Vineyard one of the first vineyards in the district; and while not a pioneer in the industry he was considered the father of its progress. Initially testing the suitability of the land with ten acres it later expanded to over 700 acres with cellarage for some 750,000 gallons of wine with a world-wide reputation.

Morris was one of the first to promote Victorian wines overseas and he travelled extensively to Europe as a recognised authority on viticultural matters. In 1886 he was a commissioner for Victoria at the Colonial and Indian Exhibition in London where he vigorously promoted Australian wines with great success. One of nine original members of the Rutherglen Road Board (1862-71) and later the Shire Council (1876-78, 1881-98) he did much for the area before moving to Melbourne to retire.

He died at his Arral – Clendon Road, Toorak home on 8 January 1910 after suffering from a cerebral haemorrhage the preceding week.