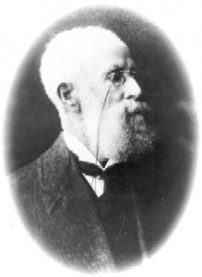 Born at Surrey, England on 11 February 1839, the son of Frederick Moore and Emily née Coe; the family migrated to Victoria in November 1852 after his father’s rubber company went bust. At the age of fourteen Moore found work in Geelong as a field-clerk with the Survey Department later becoming district surveyor where he devoted himself to learning photo-lithography and later assisted in the first telegraph line from Cape Otway to Geelong. By 1870, Moore had risen to become assistant surveyor-general with the Lands Department mapping many unsettled parts of Victoria and in his own words “sold blocks over the counter like pounds of tea”.

His promising career abruptly ended during one of the most tumultuous periods in Victoria’s history on Black Wednesday, 9 January 1878 along with some two hundred other senior public servants who were summarily dismissed without distinction by the (Sir Graham) Berry (Boroondara Cemetery) ministry in retaliation of the Legislative Council’s refusal to pass the Appropriation Bill. He then went on to open the Melbourne Exchange where his vision and uncanny knack of realising the use of new inventions saw him become the first to introduce to Melbourne electricity (July 1881) and a public telephone system (May 1880); The Australasian Sketcher writing in January 1881 said;

“any invention which will enable a man sitting in his own office to…send his wife any reasonable excuse for his non-appearance at home at the usual hour, deserves a first-class certificate”.

During the heady days of the land speculation of the 1880s and 90s, Moore gambled and lost heavily having given his personal guarantee to the “Beaumaris Park Estate Co Ltd”; his debts amounted to £66,183 paying his creditors just 3d in the pound. But Moore’s greatest legacy was as secretary of the Victorian Racing Club (1881-1925). Little interested in horse racing his twelve word application for the position on the death of Robert Bagot (Melbourne General Cemetery) was accepted (“the greatest surprise of his life”); he claimed to know nothing about racing and never made a bet. But as an administrator, Moore’s development of the Flemington racecourse as the finest in the Southern Hemisphere was large and far-seeing as his execution of them masterly. By the time of his death, The Age commented “in the history of racing in Victoria, his name cannot be removed from the place of greatest prominence”; he paid £10,000 of his own money for 100 acres after the committee refused; oversaw the construction of four grandstands; and created the spacious lawns and rose gardens. Melbourne Punch wrote of Moore in 1921;

“To conjure up a mental picture of Byron Moore is to imagine a tall, stately gentleman with long, flowing beard silken texture, and immaculate in colour”.