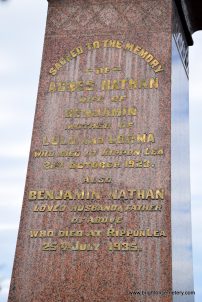 Benjamin Nathan was born in 1864 at Collingwood, Melbourne into a large family of Benjamin Nathan (d 1902), a gold-rush immigrant and his wife Eliza née Reece that included brothers Simeon (q.v.) and George (q.v.) who all became wealthy in the home furnishing industry. Educated at the Model School, Nathan went on to make considerable wealth as co-founder of the Australia-wide Maples furniture and music store chain (1887) with Frederick Thomas, which by the time of his death had over fifteen stores in two states.

In December 1910 he purchased the mansion Rippon Lea – 192 Hotham Street, Elsternwick from the estate of Sir Thomas Bent (q.v.), whose timely death in 1908 saved the nineteen acre estate from further subdivisions. Under Nathan, the house became more of a family home with less lavished parties and public functions; he introduced extensive range of native plants from all over Australia, erected a large conservatory and numerous glasshouses for his growing award-winning orchid collection and built the entrance lodge off Hotham Street (1929).

Portrayed in Frank Hardy’s (1917-94) explosive ‘novel’ “Power Without Glory” (1950) as ‘Benjamin Levy’, Nathan was a close business partner of John Wren (Boroondara Cemetery). In the book, Hardy would describe ‘Levy’ as “a wizened, bald-headed, miserable-looking old man in his second childhood” who as owner of the Ascot pony racecourse was in financial difficulty. Together they purchased the languishing Brisbane Daily Mail (1915), speculated in mining stocks and acquired control of numerous racecourses principally in Queensland – Albion Park, Sandgate (Deagon), Kedron Park, and Doomben Park (“by 1922 Wren and Nathan had owned or leased all Brisbane and Ipswich racecourses with the exception of…Eagle Farm”). A keen racegoer who was disqualified in 1896 for bribing a jockey, Nathan exacted revenge through ownership of the colourful pony tracks (“the poor man’s courses”) at Richmond, Fitzroy and Ascot “but lacked the flair to make them a success”.

Nathan died on 25 July 1935 aged 71 with an estate valued for probate at £1,087,903 (“the largest in Victoria during 1935-39”) of which his daughter Louisa Jones (Springvale Botanical Cemetery) inherited Rippon Lea later donated to the National Trust after her death in July 1972 in honour of Nathan’s wishes that the estate should be preserved for the public.