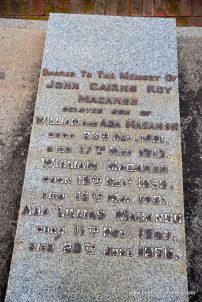 Educated at Newcastle Grammar School and Sydney Grammar School after matriculating at Sydney University he spent a term at Trinity College, Melbourne University before gaining his degrees at Edinburgh University, Scotland (LFPS, 1885; MB, Ch.M, 1886; LRCP (Edin); LRCS (Edin); LRFPS (Glas)). After fulfilling a term as House Physician at the Edinburgh Royal Infirmary under Professor John Wyllie and Rotunda Hospital, Dublin, Macansh then returned to Australia in 1887 where until his death, he ran a medical practice on Church Street, Brighton. A man of “broad outlook and wide experience, kindly, sympathetic and lovable”, in local affairs, he served on the Council (1892-94, Mayor 1893-94) as a member of the ‘faction’ that enabled Thomas Bent (q.v.) to yield control; he was later appointed Municipal Health Officer (1895-1912) when he was succeeded by Dr William McCelland (q.v.). He was later involved in transport duty to and from Egypt for twelve months during World War I, but indifferent health compelled him to relinquish military duties; it was said he “was proud that he had 32 relations fighting during the war”.

Residing at Goombah – Church Street, Middle Brighton, Macansh died on 15 May 1921 from a stroke; his grave was dug the “same depth as son [John d 1913] was buried”. A staunch Liberal and firm believer in Federation, the local Brighton Southern Cross newspaper was eloquent in its praise;

“there passed from our midst an honourable, generous, and courteous Scottish-Australian Christian gentleman…a man of benevolent and happy disposition and kindly manner. He was a staunch friend, generous in mind and heart, one who looked for the good in each, and to whom the most trivial confidence was sacred…respected and beloved by all employed by him, it has been said by one who has spent more than 25 years in his service, that he never spoke one cross word to her in all that time”.

On 16 December 1890 at Toorak, Melbourne he married Ada née Lloyd (d 1936); they had two children. Though he choose a career in the medical profession The Pastoral Review noted that Macansh was always heavily involved with the vast family holdings.