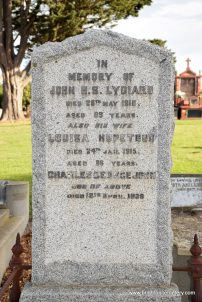 Born at Guildford, Surrey, England, the son of George Lydiard, a naval officer and Mary née Sturt, aunt of the explorer Captain Charles Sturt. He arrived in Victoria in 1852 to join his famous cousin, and instead joined the Victorian Police on 1 April 1852 and was believed to have been the first cadet appointed to the gold escort, stationed at Carlsruhe and Castlemaine. During the Eureka uprising in December 1854, Lydiard was one of twelve troopers sent to Ballarat. He later became a well-known pastoralist in the Riverina district as owner of Moolpa on the Edwards River and later Coree near Deniliquin.