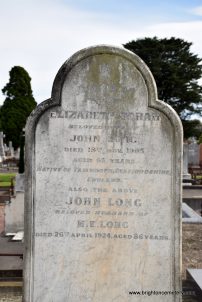 Born at Tamworth, Staffordshire, England, Long arrived in Victoria in December 1857 on the Shakespeare with friend Robert Marriott (1838-96), who went on to become a well-known market gardener in the area. After together trying their luck on the diggings in Bendigo, the trior moved to Caulfield, took up land in Grange Road between the Glenhuntly and Ormond railway stations, where they prospered; Long went on to marry Robert’s sister Elizabeth (d 1905) who had attended the same school in Tamworth; they had six sons, Frederick, Edwin, Arthur, Rudolph, Ernest and Gordon. Until 1885 he undertook general farming. During the mad 1880s, Long was elected to the local Caulfield Shire Council (1887-c1907) serving one term as President in 1891-92, “during his term in the council, the municipality made good progress, and much valuable work was done by Mr Long”.

A foundation member of the Elsternwick Club, Long “also took an active interest in all local public matters” and was a Justice of the Peace regularly attending to his duties at the Caulfield Police Court. He died on 26 April 1924 survived by his second wife whom he married in 1913.

A photo taken of the Caulfield Borough Council in 1901 shows a seated Long, upright and tall, gruff almost working-class in appearance, bald with untrimmed moustache.