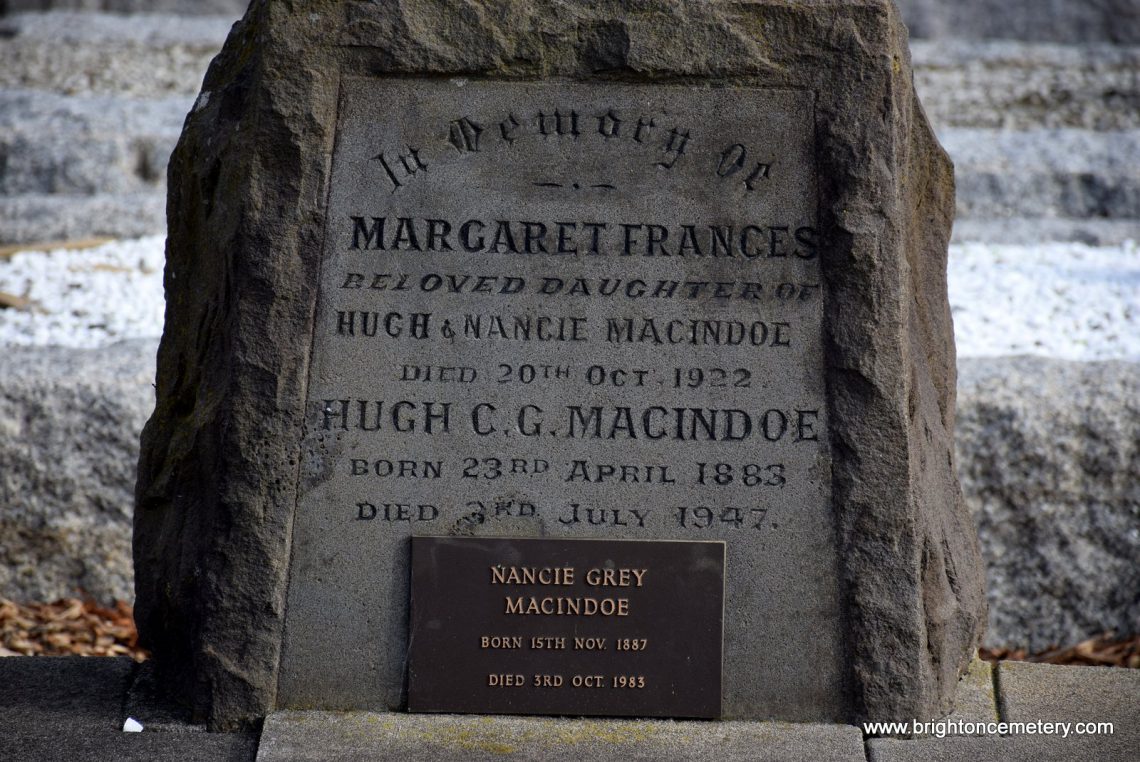 Born at Dalmuir, Dumbartonshire, Scotland on 23 April 1883 and educated privately in Melbourne after the family migrated in 1889. At the age of thirteen he entered the solicitors office of Frank Grey-Smith as a clerk and went on to join the Transvaal Civil Service in South Africa (1902-07) rising to become a private prosector in Pretoria. In 1907 he went to London to study jurisprudence and in 1910 was called to the English Bar before returning to Australia where he was likewise admitted to the Victorian (1910) and New South Wales Bars (1911) and read in the chambers of (Sir) William McArthur (Camperdown Cemetery) later judge of the Supreme Court (1920-34). So much has been written of the egalitarian nature of the Australian Imperial Force that all classes covering a diverse range of occupations enlisted for overseas service during the Great War.

As a solicitor, Macindoe is one such example of this egalitarian nature when he enlisted as a private in January 1915. He served for a period at Gallipoli with the 23rd Battalion but was invalided and returned to Australia the following January. Medically unit, his war service was terminated on 24 March 1916 with the rank of lieutenant. In 1917, during the second conscription referendum when it was established that grievances from returned soldiers were conspiring against voluntary enlistment, Macindoe was entrusted to investigate each complaint. (Sir) Ernest Scott (1867-1939), writing in Volume XI of the Official History said;

“Macindoe…applied himself to this task, and was given permission to examine departmental files bearing on any case. He dealt very promptly with every one. No possible cause of grievance was neglected”.

After the war, Macindoe continued his career in Law and in 1919 became Senior Crown Prosecutor in Victoria (1919-26) before his appointment to the County Court Bench (1926-46) succeeding George Dethridge (1863-1938); in 1936 he chaired the royal commission into the wounding of Superintendent John Brophy that led to the resignation in disgrace of the Chief Commissioner of Police Sir Thomas Blamey (1884-1951) on 9 July.

Residing at Kingsburgh – 14 Maple Grove Toorak, Macindoe died on 3 July 1947 survived by his wife Nancie née Grey-Smith (1887-1983) whom he married on 27 September 1916 and was cremated at Springvale Botanical Cemetery.