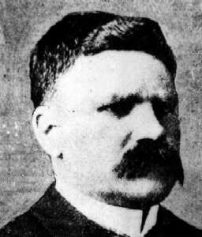 Born in Bendigo, Victoria on 7 August 1863 the son of Irish born parents David Mackey and Mary Anne née Moore; his education was limited and largely self taught having been compelled to earn a living at an early age. Nonetheless, he overcame this adversity and matriculated in 1883 before entering Melbourne University (BA, 1887; MA, 1889; LL.B, 1890) where he managed to support himself by student coaching and working at the printing firm of “Mason, Firth & McCutcheon Pty Ltd”; fellow students John Monash (q.v.), Charles Long (Frankston Cemetery) and Frank Tate (Box Hill Cemetery) were all life long friends.

After graduation, Mackey was admitted to the Bar and became a lecturer at the Working Men’s College teaching classics and history; and logic, mental and moral philosophy at Melbourne University in Henry Laurie’s (Boroondara Cemetery) absence which he won first-class honours during his studies. With his law career amounting to very little, and having second thoughts of a career in education, Mackey rekindled the ‘political fire’ of his student years and stood unsuccessfully as a liberal free trader for Melbourne South (1894); Ripon and Hampden (1897) and West Gippsland (1900) before finally succeeding in October with West Gippsland (1902-24); he was said to have been so popular that he was opposed only once.

A key member of Thomas Bent’s (q.v.) ministry (1904-09), Mackey was described as a “constructive, common-sense reformer…adept at speedily drafting amendments at the table of the House” and responsible for some of the most progressive legal and social reforms of his era including the ‘Flos Greig enabling bill’ (1903) that paved the way for women to practice law; the Registration of Teachers and Schools Act (1905) that required the registration of teachers and the regulation of training courses; the Children’s Court Act (1906) upon the urgings of Vida Goldstein (1869-1949); establishment of the Indeterminate Sentences Board (1907); creation of the Court of Criminal Appeal (1914) and perhaps his most important contribution, the Country Roads Board Act (1912) to improve the appalling conditions of country roads. On the fall of the Peacock ministry in November 1917, Sir John Bowser (Wangaratta Cemetery) had hoped Mackey would succeed as Premier, instead he became Speaker of the Legislative Assembly (1917-24) a position he held until his death; contemporaries described him as “strict, fair and courteous…highly regarded for his clarity of mind, sincerity, forbearance and good humour”.