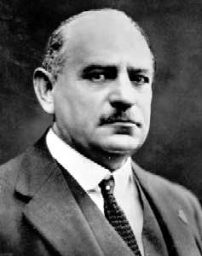 Monash was educated at Scotch College (1877-81) in a class that included (Sir) James McCay (Box Hill Cemetery), later to figure so controversially during the First World War. He was dux of his class in his final year before studying Arts, Engineering and Law at Melbourne University (BCE, 1891; MCE, 1893; BA, LL.B, 1895), but not without struggle; he abandoned his studies all together in 1885 due to his mother’s death and short of money found work as an engineer working on the Princes Bridge (1885-88) and in charge of the Outer Circle suburban railway (1888-90).

By the eve of the Great War, after experiencing business hardships and failures, Monash was now a pillar of Melbourne society with a reputation as a leading civil-engineer specialising in reinforced concrete constructions and president of the Victorian Institute of Engineers. While at university, Monash joined the 4th Battalion, Victorian Rifles in July 1884 and later the North Melbourne Battery after the former unit was disbanded in July 1886.

At the outbreak of World War One, he held the rank of colonel and in September 1914 was appointed to command the finest brigade of the 1st AIF – the 4th Brigade. He oversaw the units’ operations at Gallipoli where he developed a reputation for thoroughness and sound staff work, even though he had no role in the planning of many failures that characterised the campaign.

The higher in rank, the better Monash performed. Promoted in July 1915 to brigadier-general, he oversaw the brigade’s transfer to France the following June and the following month was promoted to command the newly formed 3rd Division at Sailsbury Plain, England. Having instilled discipline and a sense of pride, the first major battle at Messines on 7 June 1917 was an overwhelming success due to the meticulous planning in spite of German knowledge of the impending attack. Later at Broodseinde Ridge in October, the division took part in what was the most successful operation yet undertaken by the AIF in the war. These successes and Monash’s brilliant grasp of the tactical situation brought upon by the great German breakthroughs of March and April 1918, led to his appointment as Corps Commander on 31 May 1918, but not after being vigorously opposed by the official war historian Charles Bean (1879-1968) and (Sir) Keith Murdoch (1885-1952) who both favoured Major-General (Sir) Cyril White (1876-1940) causing immense distraction to the higher commanders during a vital period of the war.

No finer man was more amply suited to the role of leading the Corps during the great decisive victories of 1918; his dogma was to simply feed the troops on victory. His greatest achievement was at Hamel on 4 July 1918, described as the first modern battle in which the tanks, infantry, artillery and airforce acted in cohesion. The following month this was again repeated on a larger and more successful scale during the Second Battle of Amiens on 8 August, a classic set-piece battle considered the greatest success of the war in both material captured, prisoners taken, ground gained and more importantly in moral to the Allied cause.

Knighted in the field on 12 August 1918 by King George V, Monash’s greatness as a commander was due to his forceful personality that induced respect enabling him to drive the most out of his men; his personal qualities of humility, intellectual capacity, orderly thinking and articulateness; a brilliant grasp of tactics and technical mastery of all arms; meticulous battle planning and organisation; and a fair portion of luck and good timing that eluded his contemporaries. But nor was Monash infallible: he never once visited the front line to gain a grasp of the ground; he had a tendency to ignore the advice of more informed junior commanders and had a reputation for bullying and ruthlessness during a battle; and was known as a showman who craved publicity and honours. After the armistice, Monash was given charge of repatriating some 160,000 troops in less than eight months considered a remarkable achievement.

In his final years, he took on the chairmanship of the State Electricity Commission (1920-31) overseeing the arduous task of building a great public utility to supply abundant cheap electricity and freeing the state from the reliance on unreliable and costly power from New South Wales.