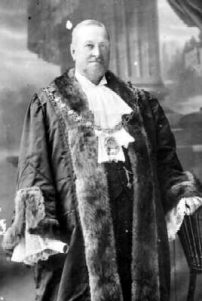 Born at Lancashire, England in 1844, the eldest son of George Billson (1817-86), brewer and politician and Isabella née Blades. Early in 1848 the family migrated to Adelaide, South Australia and the following year joined the gold rush in California, USA but returned to settle in Victoria from 1852; at Beechworth from 1867 he purchased a brewery and with George ran a cordial and aerated waters manufactory from 1872.

A prominent citizen, Councillor and Mayor of Albury in New South Wales before moving to Dun Lappie – Glenhuntly Road, Elsternwick, in 1901, Billson was elected to the St. Kilda City Council (1901-11) serving as Mayor in 1909. His aerated water manufacturing business on Brighton Road, Elsternwick (between Albion and Maryville Streets) was described as “one of the most compact and cleanly establishments in Melbourne”. With Charles Catani (q.v.), Billson was appointed an original member of the St. Kilda Foreshore Committee on 19 June 1906 that was responsible for the development of the St. Kilda Esplanade into what it is today. The Cyclopedia of Victoria writing in 1903 notes that;

“Mr Billson supports local industry in every possible branch…All bottles manufactured in the Melbourne Bottle Works, likewise other supplies such as the boiler and bottling machines and the engine which drives the plant”.

He died suddenly at home on 9 September 1927 aged 83; his brother Alfred Arthur (1858-1930) followed his father and became a well-known politician, brewer and citizen of Beechworth.