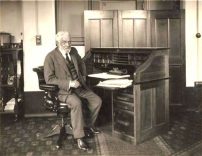 Born at Newcastle, New South Wales on 12 April 1861 the son of John Bingle and Frances née Corlette; Bingle’s paternal grandfather, John (1796-1882) introduced the first regular trading service between Sydney and Newcastle in 1822. After his education at the local grammar school, Walter spent a decade working with the firm his grandfather founded, “Bingle & Co”.

After a period as vice-consul in Italy and the Netherlands, Bingle began a lifetime in the public service, rising from a clerk in the NSW public service (1885), to the position of permanent secretary of the Federal Department of Works and Railways (1917-26). Bingle was closely involved in pre-Federation conferences; in 1901 he transferred to Melbourne and became chief clerk under his former Premier, Sir William Lyne (Waverley Cemetery). As acting head of Home Affairs (1907-09 and 1914-16), Bingle was implicated in the Blacket Royal Commission investigating Walter Burley Griffin’s design for Canberra alleging that he “had been obstructive in delaying communication of vital information to Griffin”; years later, Bingle commented to a friend he had tried to do his best to advance Canberra.

Described as “reflective in temperament and easily moved”, he died on 7 August 1928 aged 67 survived by his wife Emily née Pinhey whom he married on 19 October 1887. Reflecting on four decades as a public servant, Bingle noted that “the highest officially are not always the most desirable socially”.

(By permission of the National Library of Australia, nla.pic-an23194270)