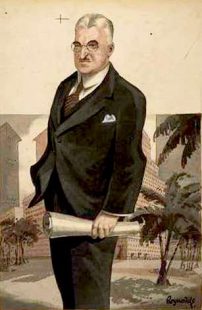 Blackett was born on 18 September 1873 at Gertrude Street, Fitzroy, Victoria the son of the noted pharmacist and government analyst Cuthbert Blackett (d 1902) and Margaretta née Palmer. Educated at Scotch College and later Melbourne University, in 1895 he worked as a draftsman in Western Australia for two years before returning to Victoria.

From 1899, Blackett was involved in a number of architectural partnerships notably with his cousin William Blackett Forster (1914-32); noted “for his house remodelling and as a designer of interior decoration and fittings”, in 1929 “Blackett & Forster” won the Royal Victorian Institute of Architects’ medal for Francis House, Collins Street (1927). Other designs include the Warburton Chalet (1929) and Victor Horsley Chambers, Collins Street (1926). On 13 February 1917 he enlisted and served in the Education Service attaining the rank of Lieutentant returning home in November 1919. As an architect, Blackett’s contribution was through the advancement of the professional bodies rather than his private practice. He served as a councillor of the Royal Victorian Institute Architects (1907-52) and president in 1916-18 and 1928-30; he later went on to become first president of the Australian chapter in 1930 and was awarded a life fellowship in 1952. His greatest achievement was as a member of Legacy. As vice-president (1926-27), Blackett along with others, including Donovan Joynt VC (q.v.) was instrumental in campaigning for the Shrine of Remembrance concept in the face of fierce opposition from the State Government, the R.S.L, the Melbourne City Council and Keith Murdoch’s Herald newspaper.

(By permission of the National Library of Australia, nla.pic-an10046136)